Directed by Jesse Peretz
A delightfully funny film about a modern-day holy fool who brings chaos into the lives of his sisters while opening their hearts at the same time.

The spiritual traditions all have a role for pranksters — those playful individuals whose eccentric antics usually make them outsiders: Nasruddin in Sufism, Coyote in Native American spirituality, and the Holy Fool in Christianity. Their crazy wisdom is at first not easy to affirm but, in the long run, they help deliver us from our habitual ways of being in the world. They are spiritual teachers in disguise.

Ned (Paul Rudd), the lead character in the quirky and enjoyable Our Idiot Brother stands in the holy food tradition in movies made popular by Forrest Gump, the innocent with a good-heart who works wonders with the people he meets, and The Big Lebowski, the "Dude" whose motto is "take it easy." Ned is a cheerful and optimistic fellow always ready with an appreciative word or a kind deed. In our competitive, hurry-obsessed culture, it is hard to comprehend such courtesy and selflessness, not to mention his unabashed honesty.

Ned is a biodynamic farmer who has been living and working with his girlfriend Janet (Kathryn Hanh) for three years. His laid-back ways come to the fore when a policeman begs him for some pot since he's had a terrible week; Ned tries to give him some but the cop insists on paying, and then promptly arrests him. After spending some time in prison, Ned returns home to find that Janet has ditched him and refuses to let him take his beloved dog, a Golden Retriever named Willie Nelson, with him. Without a home or a job, Ned has nowhere to go but his mother's place on Long Island. She (Shirley Knight) accepts him, no matter what he's done. His three sisters, on the other hand, are less understanding.

Liz (Emily Mortimer), his married sister, tells him that her door will always be open to him. Ned decides to visit and stay with her for a while. Her husband Dylan (Steve Coogan), a documentary filmmaker, gives him a menial job which leads to a startling discovery on Ned's part. Liz is taken aback by the heavy influence her nonconformist and playful brother has had on her young son River (Matthew Mindler). She decides to kick him out despite his well-meaning intentions to liberate the boy from his parents' high expectations.

Next Ned camps out at his sister Miranda's (Elizabeth Banks) West Village apartment. She is single and a Vanity Fair staff writer working on a piece about Lady Arabella Galloway (Janet Montgomery), a woman on the brink of scandal. Only trouble is, this celebrity connects with the relaxed Ned, who is serving as Miranda's driver, and wants nothing to do with Miranda's aggressive ways. An intimate talk with Jeremy (Adam Scott), her neighbor and best friend, also gets Ned in trouble with Miranda.

Natalie (Zooey Deschanel) is the youngest sister; she is bi-sexual and still searching for a creative path. Her latest attempt is to be a stand-up comedian. She gets her brother a gig posing nude for a painter (Hugh Dancy). Ned soon enlists the services of Natalie's lover Cindy (Rashida Jones) to help him retrieve his dog. Perhaps the person most impressed with Ned's courtesy, sincerity, and goodness is his parole officer (Sterling K. Brown), who has never come across anyone quite like him.

Our Idiot Brother is directed by Jesse Peretz from a screenplay by Evgenia Peretz and David Schisgall. This delightfully funny comedy is carried by a near-perfect performance by Paul Rudd who makes Ned into an endearing holy fool with an inner contentment that is lacking in the rest of his family. No wonder they want him out of their lives! But with a holy fool, things can turn around in an instant.

Special features on the DVD include an audio commentary with director Jesse Peretz; the making of Our Idiot Brother; and deleted and extended scenes. 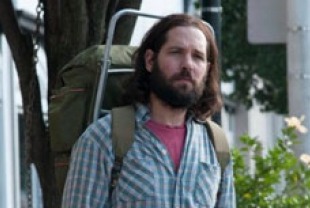 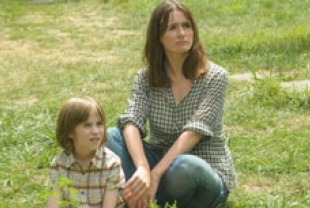 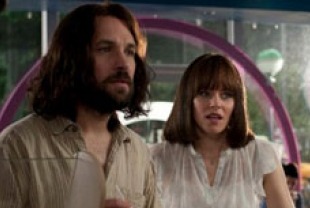 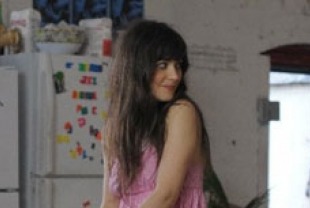