Directed by Adam Kassen, Mark Kassen
An ethically-charged courtroom drama about a David vs. Goliath battle.

Mike Weiss (Chris Evans) is a gifted lawyer in Houston, Texas, where he and Paul (Mark Kassen), his best friend and business partner, are personal injury attorneys. To keep his edge in the courtroom and elsewhere Mike secretly relies on drugs. Amazingly, he is still able to function despite his addiction.

Another successful lawyer (Jesse L. Martin) gives them cases too small for his large firm to handle. Mike's ego and his identification with those who have been unjustly treated by the powerful both come to the fore when he hears about the case of Vicky (Vinessa Shaw), a local ER nurse who was pricked by a needle contaminated with HIV. Her health is deteriorating and she is enraged that the hospitals do not want to purchase "Safety Point" syringes invented by Jeffrey Dancort (Marshall Bell) as a safeguard for health care workers. At first, Daryl doesn't want to take the case because they do not have the resources or the staff to handle it. But then he capitulates to Mike who is eager to challenge the greed and immorality of the health care and pharmaceutical companies blocking the use of the syringes.

Their adversary in the courtroom is the wealthy, arrogant, and powerfully connected attorney Nathaniel Price (Brett Cullen) who has all kinds of tricks and tactics to use in gaining another victory for the corporate interests he represents. Just when things seem to be spiraling downward for Mike and Daryl, Senator O'Reilly (Kate Burton) says that she stands with them and will support their cause. Then a whistle-blower (Michael Biehn) adds his perspective. But can these two underdog lawyers survive against the formidable money and power of Price's clients?

Puncture is co-produced and directed by Adam Kassan and Mark Kassen based on a real life story. Some disturbing facts are related to this story:

• More than1,000 of them have become infected with HIV/AIDS, hepatitis B and C, and other deadly blood-borne diseases.

In addition to shining a light on this appalling ethical situation, the Kassen brothers are to be commended for their nuanced depiction of Mike, a drug-addict whose flaws and secrets do not diminish his pursuit of justice in a David vs. Goliath case. He is a hero despite his self-destructive impulses. 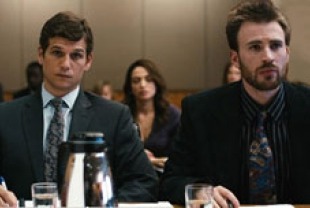 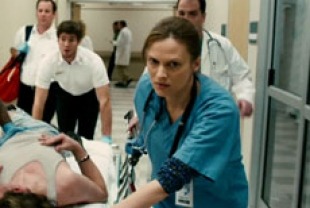 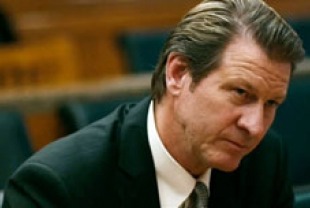 R - drug use, language, some nudity, a sexual reference