Directed by Chris Miller
A razzle-dazzle animated feature about an outlaw cat who dances flamenco and is a survivor able to handle all challenges before him.

We love movies about cats. We are fans of flamenco dancing. There is no way we would not like this animated 3D film which features Puss in Boots (voiced by Antonio Banderas) as an accomplished flamenco dancer! This cat with large saucer bowl eyes, a feathered hat, and a frisky attitude arrives in San Ricardo as a wanted outlaw.

When Puss in Boots makes a move to steal some magic beans from Jack and Jill (Billy Bob Thornton and Amy Sedaris), two ugly and demented outlaws, he encounters a competitor named Kitty Softpaws (Salma Hayek) who is not only a gifted fighter but a talented dancer. Puss in Boots tries to romance and impress her but has a difficult time with both pursuits.

Humpty Dumpty (Zach Galifianakas) appears on the scene, and we learn that there are still bad feelings between the outlaw cat and this wheeler dealer egg-head. They were buddies in an orphanage but Humpty Dumpty betrayed Puss in Boots in a bank robbery fiasco. Now they put away their mutual grudges (or so it seems) to steal the precious eggs of the Golden Goose.

Chris Miller directs this razzle-dazzle film that features the most interesting character in the Shrek franchise. He wows us with his flamenco dancing, his ability to run across roofs, his swordplay, his sharp wit, and his romancing of Kitty Softpaws. Three cheers for this clever cat who wins us over with his playfulness, purrs, and those oh-so-big eyes.

Special features on the DVD include: "Purr-fect Pairings: The Voices Behind the Legends"; deleted scenes; and the world of Dreamworks Animation. 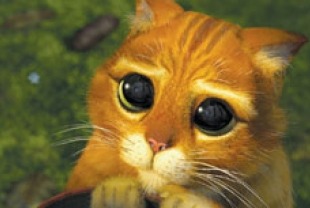 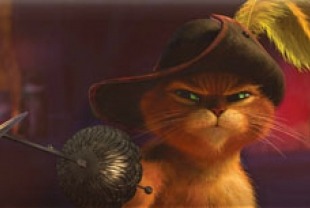 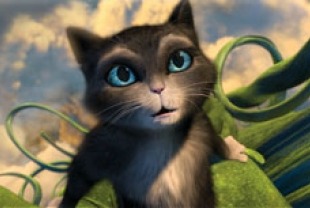 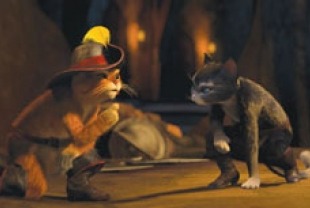 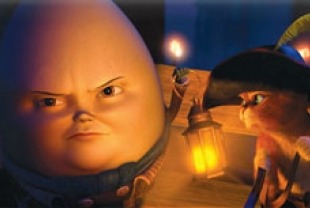 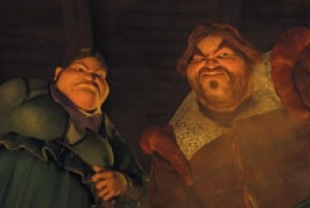 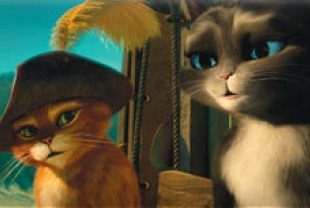