Directed by Amy Kellum
A documentary celebrating the creativity and mysticism of Meinrad Craighead.

Meinrad Craighead is a very special artist who has done many paintings of the Divine Mother in her many different guises. At the beginning of this 60-minute documentary, she states: "Prayer is really sitting in silence, centering the wholeness of your being in whatever situation you find yourself in." This view enables us to consider her mystical art as a continuing act of devotion. And those who open their hearts and minds to her creations can be said to be in prayer.

Craighead's spiritual journey has taken her from childhood in Arkansas where she gathered wisdom from her grandmother, to teaching in the Southwest, studying in Italy, and spending 14 years in England as a nun. The artist returned to New Mexico in 1983 and has created paintings and prints with imagery from some of her favorite sources — Catholicism, Native American shamanism, and ancient mythology.

Craighead shares her reactions to a devastating fire near her home during which she felt deep empathy for all the affected animals. We see scenes of her pilgrimage to Spain to the Black Madonna of Montserrat. A handful of women offer their praise for the beauty, mystery, and spirituality of her artistry. The documentary produced by Amy Kellum shows nearly 100 of Meinrad Craighead's paintings and prints. 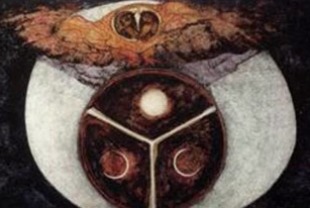 Meinrad Craighead: Crow Mother and The Dog God - A Retrospective

Gallery of art from Meinrad Craighead