Directed by Alexander Payne
A masterful and emotionally rich movie about the grief of parting and the agony of separation.

There is a Japanese proverb that goes: "The grief of parting and the agony of separation are the way of the world." With his extraordinary respect for the flaws and vulnerabilities of human beings, director Alexander Payne has fashioned another emotionally rich film that blends serious drama with many comic moments. The characters in the impressive screenplay by Payne, Nat Faxon, and Jim Rash, based on the novel by Kaui Hart Hemmings, refuse to sit still and be judged quickly. They jump and do somersaults when we try to pin them down. We saw the same modus operandi in Payne's films Sideways and to a lesser extent with About Schmidt. The Descendants takes on the challenging subject of loss which can be seen as the dominant experience of our times. In the course of our lives, we have to give up and let go of much that we have loved. This involves large doses of pain but also can be the source of incredible growth and gain.

Matt King (George Clooney) and his family live in Hawaii. He is a real-estate lawyer and the main executor of a trust that holds 25,000 acres of pristine beachside land that has been in his family since 1860. He and his cousins are taking bids from firms that want to develop the property, and Matt has the final say on who gets it. Cousin Hugh (Beau Bridges) wants it to go to a local guy.

Matt has been so busy with that family business that he has not spent much time with his own daughters. Seventeen-year-old Alex (Shailene Woodley) has been exiled to boarding school on another island because of drug use. Ten-year-old Scottie (Amara Miller) has been sending harassing texts to a schoolmate. His wife Elizabeth (Patricia Hastie) has been injured in a speedboat accident and is lying in a coma at the hospital. This means that Matt is no longer the "backup parent," and he's at a loss most of the time about what to do.

In his mind, Matthew creates a soothing and calming fantasy about what he'll do when Elizabeth wakes up. He'll quit working and they will go on a world tour and rekindle the love and the passion of their early years of marriage. But the doctor's report on her condition is negative: she is brain dead and it is time to withdraw life support; her Advanced Directive stipulates that no extraordinary measures be taken to keep her alive.

After Matt takes Scottie to apologize to the girl from school, they head off to the boarding school to retrieve Alex. He wants her to accompany him on a visit to Elizabeth's parents to tell them that she is dying. Alex brings along her stoner friend Sid (Nick Krause), much to her father and grandfather's dismay. Together, they listen to a diatribe by the old man (Robert Forster) who pays tribute to his daughter's strength of character and criticizes Matthew as a rich husband who didn't provide for her needs.

Payne is an accomplished director who is able to keep many balls in the air at the same time. Although Matthew is overwhelmed by the grief over Elizabeth's imminent parting, he is even more shattered when Alex tells him that his wife had been having an affair. In one of the many startling scenes in The Descendants, Matthew runs as fast as he can in his sandals to the home of Elizabeth's best friend in order to verify what his daughter has said. Now, for the first time in his life, he feels the agony of separation and the loss of his illusions about his life-together-in-love with his wife. Supported by Alex who had a huge fight with her mother about her affair, Matthew decides to track down Elizabeth's lover to tell him she is dying and to confront him with the fact that he knows about their affair.

David Grayson has wisely written: "We are all of us calling and calling across the incalculable gulfs which separate us." This yearning for connection is what fuels the growth and the gain that can come from loss. In another memorable scene, Matthew can't sleep at night and ends up chatting with Sid, Alex's fun-loving friend. In a few minutes of conversation he discovers a connection between them: Matthew is mourning his wife, and Sid is mourning his father's recent death. The point sinks into our consciousness: the spiritual teachers from all traditions are right when they tell us not to close anyone out of our hearts.

Matthew's encounter with Brian Speer (Matthew Lillard) and his wife (Judy Greer) enables him to take care of his own considerable anger and pain. Best of all, during this week of suffering, Matt really connects with his daughters. It is that bond that enables him to make a final decision about the land that his relatives are pressuring him to sell. His connection to his ancestors and to the next generation grounds him in a place of authenticity.

Special features on the DVD include "Everybody Loves George"; "Working with Alexander"; "The Real Descendants"; and Hawaiian Style, music videos and more. 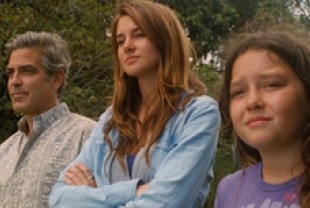 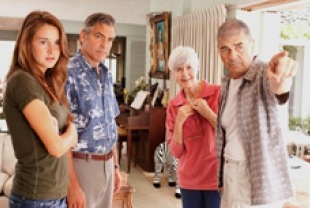 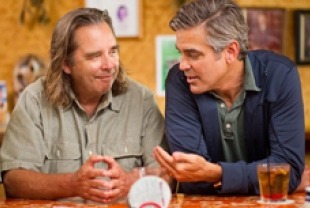 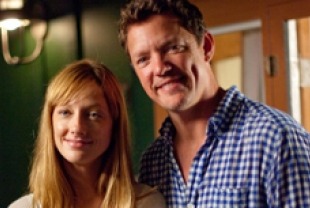