Directed by David Cronenberg
A cerebral trip with Jung and Freud, sex and cigars, the talking cure and adventures beyond.

Outside Zurich in 1904, young Sabina Spielrein (Keira Knightly) is being treated at a mental hospital for her masochistic hysteria. Dr. Carl Jung (Michael Fassbender), a country parson's son, is using Sigmund Freud's psychoanalysis (the talking cure) to treat her. In the process, he learns that when she was a little girl and her father beat and humiliated her, she experienced sexual arousal. At times, this troubled patient reveals her intelligence and at other times she contorts her face and juts out her jaw like a wild animal. Yet under Jung's patient and probing care, Sabina improves.

It is with great anticipation and pleasure that Jung finally meets his mentor, Sigmund Freud (Viggo Mortensen), a cigar-smoking, arrogant, and avid defender of his besieged theory about the all-important role of sex in human development. The master is quite impressed with Jung's seriousness and skills and so he sends Dr. Otto Gross (Vincent Cassel) for treatment to him. This outspoken maverick and cocaine addict believes in polygamy as a path to true fulfillment and freedom. His motto is "Don't repress anything." He suggests that Jung have sex with the virginal Sabina. Given the fact that she already had signaled her therapist that she wanted to have sex with him, Jung begins an affair with her, spiced with her delight in hard spankings. Meanwhile, Jung's wealthy and patient wife Emma (Sarah Gadon) desperately wants to give him a son after two daughters.

David Cronenberg is a cerebral director, and this material is a perfect match for his style. The screenplay is by Christopher Hampton based on his 2003 play The Talking Cure. The source of the eventual disagreement between Jung and Freud was the mentor's rigid disapproval of the younger man's attempt to make a space in the field of psychotherapy for metaphysical and mystical exploration. To illustrate the divergence of their views, the screenplay writer has them respond to the wood of a bookcase making some noises. Later Jung says: "I don't just want to open the door and show the patient his illness, squatting there like a toad. I want to find a way to help the patient reinvent himself, to send him off on a journey, at the end of which is waiting the person he was always intended to be." Freud finds this non-scientific approach to be both wanting and delusional. Fassbinder and Mortensen are convincing in their depiction of these two psychological pathfinders.

Cronenberg lets Knightley overdo Sabina's hysteria in the early scenes of the film but she improves on her portrait of the early years in the life of the first woman to become a psychoanalyst. When Jung breaks off their affair, she cuts his cheek with a knife. But the mark she leaves on his insides is far more lasting. Near the end of A Dangerous Method, Jung characterizes her as the most passionate love in his life and as "the perfume in the air."

Special features on the DVD include an audio commentary that includes Cronenberg defending Knightley's performance as authentic; AFI Master Class with Cronenberg; and a "making-of" featurette. 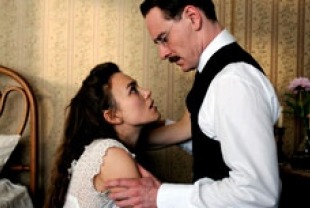 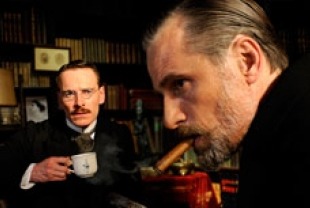 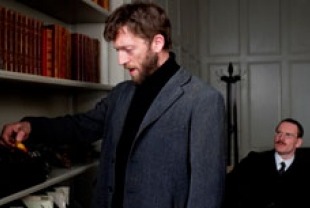 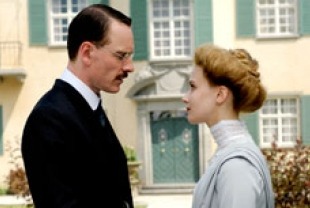