My Piece of the Pie

Directed by Cedric Klapisch
A clever and thought-provoking French comedy about two people who are thrown together: a working-class single parent and a high-finance superstar.

The gap between the rich and the poor around the world is growing as high finance hotshots in skyscrapers make millions of dollars in a minute with a click on their computer screen. Meanwhile, men and women who have worked in factories for years are fired when the place is forced to close down. The newly unemployed enter a world of hopelessness and helplessness as they pound the pavements and look to unions for assistance and encouragement. All of these developments are explored in Cedric Klapisch's clever and thought-provoking comedy My Piece of the Pie.

France (Karin Viard) is a single mother of three daughters who has been laid off by the factory where she worked for 20 years. Although the union she belongs to tries to help her navigate the passage through unemployment, she is so frightened about the future that she tries to commit suicide. She finally decides to seek work in Paris, even though it means leaving her kids with her sister. She lands a job as a cleaning lady for Steve Delarue (Gilles Lellouche), a successful financial broker who lives alone in his swank and spacious apartment. Her position is expanded when he asks her to be the nanny for his three-year old son while the boy's mother is on vacation in Thailand for a month. Steve, who lives for the adrenaline thrill of his work, is clueless about dealing with his son.

Known for his special knack for orchestrating films about the interlocking stories of many different characters (When the Cat's Away, L'Auberge espagnole, Russian Dolls), director Cedric Klapisch focuses here on France and Steve as they struggle to define their ever-shifting relationship as employee and employer, as working-class day laborer and wealthy executive, as victim and as power player. Steve gives her a little lesson on the stock market and the marvels that can be achieved by smart and aggressive brokers. France tutors him on getting closer to his son and on winning back Melody, whom he calls the love of his life. He even asks her to pretend she is his Russian escort for a dinner with business men. France makes the most of the moment with a very funny speech about her trip to the park.

What is not funny is when Steve admits to being the one who orchestrated the buyout and subsequent closing of the factory where she worked. In order to give him a taste of what it feels like to be caught up in a situation of helplessness, France takes Alban with her to her home town and orders Steve to come and get him. We find ourselves hoping that this high financial whiz will finally see the consequences of his selfish and greedy actions. My Piece of the Pie is an ambitious morality tale that works. 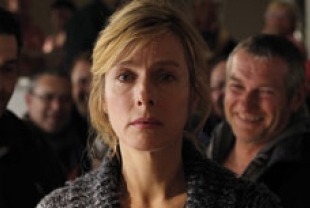 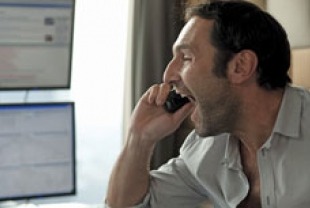 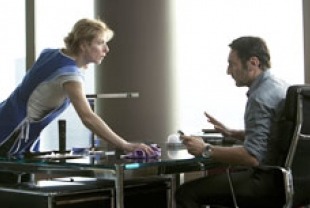 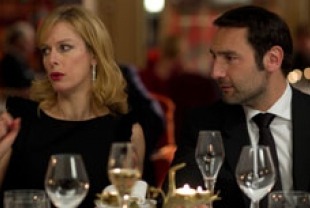