Directed by Ridley Scott
A spectacular action drama that brings us face to face with our blood lust and other powerful emotions that draw out the best and the worst in us.

This spectacular action drama brings us face to face with our own blood lust. It also speaks volumes about the powerful emotions that animate the best and the worst in us. Thanks to the consummate cinematic skills of director Ridley Scott and the literate screenplay by David Franzoni, John Logan, and William Nicholson, Gladiator is an epic drama that works on many different levels.

In 180 AD, General Maximus (Russell Crowe) leads the Roman army in a triumph over Germanic tribes. He is commended by the Emperor Marcus Aurelius (Richard Harris) who wants him to return to Rome as his successor. The dream is to shift the power from the emperor to the Senate and to restore a Republic of the people. However, the old man's plans are shattered by his envious son Commodus (Joaquin Phoenix), who murders him and orders the execution of Maximus. The General escapes but his beloved wife and son are brutally murdered at the new emperor's orders.

Maximus is captured by slave traders and taken to a North African outpost of the Empire where Proximo (Oliver Reed) trains men to fight to death as gladiators. The General is a fierce warrior, and he, along with his African friend (Djimon Hounsou), manages to stay alive in various contests. They and the other good fighters are taken to Rome by Proximo to participate in "games" set up at the Colosseum by Commodus as a ploy to win the adoration of the masses. Maximus uses his military prowess to lead his fellow gladiators to victory in their first appearance in the Colosseum. He becomes the darling of Rome.

Commodus is surprised and understandably alarmed when he discovers that the archenemy he thought was dead is wowing the crowds. While he tries to find the most serpentine way of getting rid of him, Lucilla (Connie Nielsen), his sister, hatches a secret plot to overthrow her brother with the help of Maximus and a renegade Senator (Derek Jacobi).

Most of what we see on the screen is a mirror reflection of the emotions that fuel our own passions. Like Maximus, we have all lost something precious at one time or another and know the impulse to seek revenge. Like him, we would rather ignore the messy world of politics in favor of the warmth of familial love. Like Marcus Aurelius, we have tried to do the right thing but often place huge burdens on the shoulders of those closest to us. Like Commodus, we have all felt the sting of being rejected by someone near and dear to us and have reacted with resentment and anger. Like Lucilla, we've been caught in the crossfire between two people close to us. And like Proximo, we have been surprised by moments of grace and goodness when we've transcended our basest moments of cynicism. Jean-Paul Sartre once called emotions "a transformation of the world." Although some may find the violence in Gladiator to be upsetting, its depiction of the primal emotions that constitute our lives is positively enthralling. 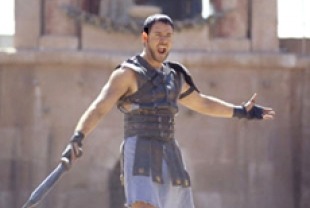