Directed by Agnieska Holland
The true story of a Polish man whose caring for Jews living underground in sewers during World War II qualifies him for recognition as a Righteous Gentile.

The Survival of the Species
"As things stand now, it may well be that the survival of the species will depend upon the capacity to foster a boundless talent for compassion. In the alchemy of a man's soul, almost all noble attributes — courage, love, faith, beauty, loyalty — can be transmuted into ruthlessness. Compassion alone stands apart."
— Eric Hoffer

The Dark Shadows of the Nazi Persecution of Jews
The terror of the Third Reich war machines and the memory of the Holocaust still cast dark shadows upon our times and consciousness. They speak to us in terrible terms about the nature of violence and hate, the virus of anti-Semitism, and the capacity of the modern state to inflict death and destruction upon millions of people. We feel appalled, diminished, and depressed in the face of the Nazi nightmare.

Keeping Our Faith in Humanity Alive
While we are beholden to remember the dimensions of hatred and indifference which characterized this period of history, we are also challenged to be aware of the heroism of those who risked their own safety in order to save Jews in Europe. Their deeds keep alive our faith in humanity and the values that make life worth living.

Righteous Gentiles
There is an avenue of trees on the way to the Holocaust Museum on the western outskirts of Jerusalem. Each tree commemorates a Gentile who risked his or her own life to save Jews during the Hitler years. The medal identifying each "Righteous Gentile "contains a Talmudic inscription: "Whoever saves a single soul, it is as if he saved the whole world."

Among these honored human beings are Oscar Schindler and Raoul Wallenberg: the dramatic stories of both of these men have been depicted in films: Wallenberg: A Hero's Story and Schindler's List. In Darkness presents the heroism of Leopold Socha, a working-class Roman Catholic who looked after a group of Jews living in sewers beneath the streets of Lvov, Poland, during the Nazi occupation. A tree is dedicated to him in Jerusalem.

A Greedy Man and a Band of Jews in Jeopardy
During World War II, Leopold Socha (Robert Wieckiewicz) is an inspector of the sewers of Lvov, Poland. He is married and has a young daughter. The city is occupied by the Nazis who have segregated most of the local Jews into a ghetto. Socha and his young friend are making the most of the chaos by stealing things from abandoned homes and storing the loot in a hiding place in the sewers.

An Indelible Scene of Panic and Horror
One day when Socha and his partner are walking through the woods, they hear gunfire, then screams coming from a group of naked women who are running for their lives with Nazi soldiers in pursuit. Socha watches the scene without feeling; he seems to have no connection with these terrified Jewish women, mothers and daughters, wives and sisters. Shortly afterwards, Socha sees the dead bodies of all the nude women.

A Descent Into An Underground Hell
A group of Jews in the ghetto discover that the sewers might provide a hiding place and are surprised to meet Socha underground. He tells them that he will serve as their guide for a large sum of money. Of course, he also has the option of turning them in to the Nazis for a reward. Socha doesn't like these men and women and they don't like him. "Never trust a Polack," one of them says to the others.

The Jews are used to hardship but now they face darkness, the smells of the sewers, and the constant presence of large and bothersome rats. Over the course of 14 months, these people struggle to survive and keep their hopes alive. At one point, they almost drown as a deluge of rain sends water into the sewers.

Among those in this underground hell are a wealthy couple (Maria Schrader and Herbert Knaup); a pious Jew; a jack-of-all trades (Marcin Bosak); a woman who has been separated from her sister; two young children; and an adulterous man and his new girlfriend. Meanwhile, Socha makes a lot of money and must constantly watch out for Bortnik (Michal Zurawski), a member of the pro-Nazi Ukrainian militia who knew him years ago.

The Spiritual Transformation of a Selfish Man into a Selfless Man
Agnieszka Holland (The Secret Garden, Washington Square) directs this chilling drama with a screenplay by David F. Shamoon from Robert Marshall's book In the Sewers of Lvov. It is hard to pinpoint when Socha changes his mind about the Jews but once he does, compassion replaces his greed and insensitivity to their plight. It is very gratifying to see his spiritual transformation into a generous and almost selfless man who takes great pleasure in ushering these bedraggled denizens of darkness into the light of day and a city liberated by the Russians. 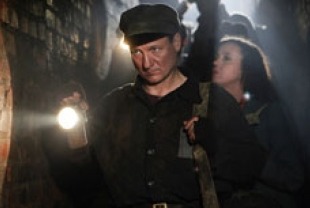 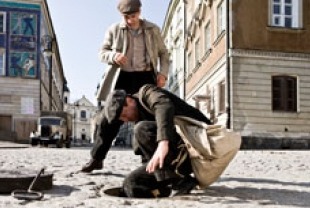