Using digitally enhanced live-action photography, special effects wizardry, and computer-animated characters, directors Ralph Zondag and Erin Leighton have fashioned an adventuresome and mesmerizing saga of those ancient creatures that have such a hold on the imagination of the young. Set 65 million years ago during the late Cretaceous Period, the film gives us a world of wonders, one informed by the scientific findings of the past 50 years.

The story is by John Harrison and Robert Nelson Jacobs. An Iguanodon named Aladar (voiced by D. B. Sweeney) is separated from his species as a hatchling and is raised on an island by a group of Lemars. Plio (Alfre Woodard) and Yar (Ossie Davis) are the matriarch and patriarch of this clan of obstreperous monkeys, including Zini (Max Casella) and Suri (Hayden Panettiere). Raised in a culture and environment different from his own, Aladar, a male, develops a nurturing spirit that enhances his natural thoughtfulness and playfulness.

When a catastrophic meteor storm destroys their paradisical island home, Aladar and the surviving members of his Lemur family escape to the mainland and join a large band of migrating dinosaurs headed for their nesting ground. The group is led by Kron (Samuel E. Wright), an authoritarian leader whose survival of the fittest philosophy shows no tolerance for the weak or the slow. With water and food running low, these dinosaurs are being chased by some fierce and bloodthirsty predators.

There is an African prayer that goes: "Let us take care of the children, for they have a long way to go. Let us take care of the elders, for they have come a long way." This morally stirring animated film provides a touching meditation on this prayer as Aladar looks after two young dinosaurs and Baylene (Joan Plowright), an elderly Brachiosaur. In doing so, he wins the love of Neera (Julianna Margulies), Kron's sister, and the admiration of Eema (Della Reese), a Styrachosaur.

Aladar with his nurturing spirit is a superb role model for children. It is rare in any movie to see a male leader animated by kindness and cooperation. The music of James Newton Howard sends our spirits soaring but this movie's message about compassion is what reaches our hearts. 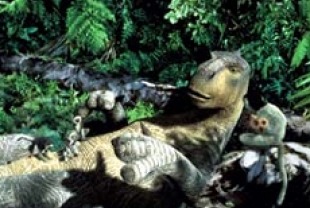