Directed by Delphine Coulin, Muriel Coulin
A rare film focusing on the feelings, fears, dreams, and emotions of girls.

For most women, pregnancy is a crash course in vulnerability. First there is the discomfort and nausea, then the pride and the joy, and often a genuine feeling of elation at the thought of having an entire person growing inside your body. Then come the regular check-ups and the glimpses of the fetus in the womb and the tiny heart pumping away. But for some women the most prevalent feeling is being out of control and helpless. The challenge is to embrace the whole mysterious and miraculous experience of pregnancy with gratitude and do the best we can is the face of cravings and the reruns of old tapes.

17 Girls is a French film directed by Delphine and Muriel Coulin based on a true story set in Gloucester, Massachusetts, that spawned a documentary, two TV shows, and a Lifetime cable movie. Here the setting is a seaside town in Brittany where 17-year old Camille (Louise Grinberg) tells her close circle of female friends that she is pregnant. She is not only a born leader but a stunning beauty with self-confidence and a rebellious spirit. Camille tells her friends that they should join her and all experience pregnancy at the same time. She sees it as an adventure, a chance for them to strike out on their own, give up their dependency on adults and boys, and eventually set up a place where they can all live together as they raise their children.

Her friends buy into Camille's dream partly out of boredom and partly because of their yearning for some meaning that can come through a new form of community. They soon find themselves undergoing the vulnerability and physical changes that are part and parcel of pregnancy.

There is not much interaction in 17 Girls with adults or boys. Camille's single mom (Florence Thomassin) is upset by what she sees as her daughter's irresponsibility and naivete. The school nurse (Noemie Lvovsky) is bewildered by the girl's solidarity once they all get pregnant. One of the girls (Yara Pilartz) has the roughest ride of all with trouble finding anyone to sleep with her and suffering all her father's wrath.

17 Girls is worth seeing just because it focuses on the feelings, fears, dreams, and emotions of girls. This is a rarity in contemporary films. It also commands attention for the appealing performance by Louise Grinberg as a strong and charismatic leader. 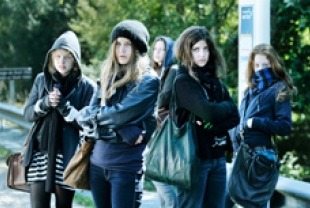 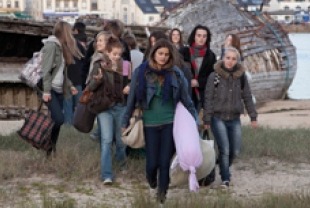 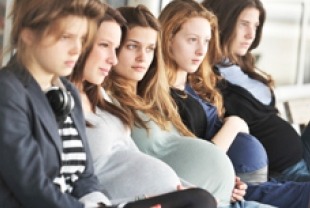