Directed by Nick Park, Peter Lord
A spunky, hilarious animated film about the yearning for freedom in the heart of a very determined hen on a farm in the English countryside.

In their first feature-length animated film, the multiple Oscar-winning team behind such popular shorts as the Wallace and Gromit films and "Creature Comforts" have created a spunky and hilarious story about the yearning for freedom in the heart of a very determined hen on a farm in the English countryside. Co-directors Peter Lord and Nick Park lift clay animation to new levels of sophistication and playfulness.

Ginger (voiced by Julia Sawalha) is determined to find another option for herself and the other hens besides constantly laying eggs and, should they falter in that role, being slaughtered, plucked, and stuffed. While the dour Mr. Tweedy (Tony Haygarth) and his menacing dogs patrol the barb-wired chicken coop, Ginger and Mac (Lynn Ferguson), the engineering genius of the henhouse, try several wild escape attempts — all to no avail. Each failure stiffens Ginger's resolve. "We'll either be free chickens or die trying," she declares. Babs (Jane Horrocks), a dim-witted hen who's always knitting, responds: "Are those the only choices?" It's hard to rally the troops.

Just when all seems lost, Rocky (Mel Gibson), a high-flying rooster, arrives on the scene. He's a cocky American who's left a traveling circus. While all the other hens swoon over this charismatic newcomer, Ginger keeps her eyes on the prize. She concludes he can teach them all how to fly. The pressure on their plan to escape intensifies when the chicken-hating Mrs. Tweedy (Miranda Richardson) purchases a machine with the intent of turning all the chickens into pies!

The interaction between Ginger and Rocky is very funny. Equally hilarious are the shenanigans of Nick (Timothy Spall) and Fetcher (Phil Daniels), two scavenger rats, and the antics of Fowler (Benjamin Whitrow), an elderly rooster who is always reminiscing about his glory days as a mascot with the RAF. When Rocky proves incapable of rising to the challenge of being a hero, Ginger steps in and surprises everybody with her high-flying plan.

Chickens of the world unite; you have nothing to lose but your chains! 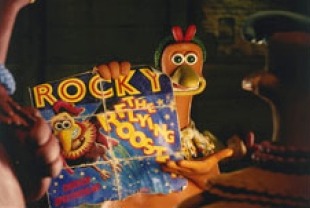