Directed by Andrey Zvyagintsev
A Russian domestic thriller set in Moscow where the gap between the rich and the poor has grown into an abyss.

Elena is a Russian domestic thriller that won the Special Jury Prize in the Un Certain Regard section of the 2011 Cannes Film Festival. The director, Andrey Zvyagintsev, has won over 40 international awards for his films. He has described this one as dealing with "a moral catastrophe." The setting is Russia under the authority of Vladimir V. Putin where the gap between the rich and the poor has grown into an abyss. We see how this inequality affects the marriage of one rich couple who are in their sixties.

Vladimir (Andrey Smirnov) is a wealthy man who married the younger Elena (Nadezhda Markina) who had been his nurse when he was in the hospital a decade ago. Now they reside in a large and luxurious apartment and sleep in separate bedrooms. Each day she rises before him, prepares breakfast, awakens him, opens the drapes, and leaves him to his morning rituals. She has become his caregiver, and he is somewhat appreciative of all she does for him.

But there is palpable tension between them that has put a chill on their relationship. Her unemployed son, Sergei (Alexey Rorin), relies on her pension money that she regularly brings him. But now he needs a large sum to make sure that his slacker son Sasha (Igor Ogurtsov) can go to college and avoid the army draft. Sergei, his wife, their young baby, and Sasha live in a crowded space and rely completely on his mother's handouts.

When Elena asks Vladimir for the money for Sasha, he responds in anger criticizing Sergei for being a lazy man who wants the world handed to him on a platter. She retorts with a verbal slam on his rebellious daughter Katarina (Yelena Lyadona) who hasn't seen her father for a long time and when she does visit, has no respect for him. Yet Vladimir is willing to give her money without any strings attached.

Things go from bad to worse when Vladimir suffers a stroke while swimming at his fancy health club. Recuperating at home, he decides to finalize his will. Fearing for the future of her son and his family, Elena decides to take matters into her own hands.

The "moral catastrophe" of contemporary Russia is that the Moscow shown here is a mirror-image of the dark side of American capitalism with its worship of money, its sleazy media, its unemployment, and its violence (Sasha's night out with his buddies and their attack on a band of men sleeping in a park). "We're all rotten seeds," says Katerina and she's right.

Special features on the DVD include: a 30-minute interview with director Andrey Zvyagintsev; a "Making-of" video on the poster screen-printing; and the U.S. theatrical trailer. 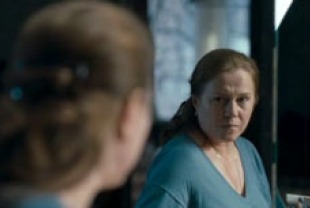 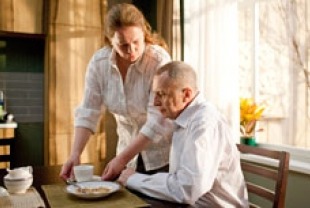 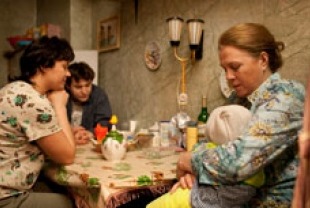