It All Starts Today

Directed by Bertrand Tavernier
An engaging and soulful masterpiece about a French kindergarten teacher who learns that when you love your work, the only way to get out of trouble is to go deeper.

French director Bertrand Tavernier has created an engaging and soulful masterpiece about a kindergarten teacher in a small French mining town where the unemployment rate is 34 percent. "Teaching tugs at the heart, opens the heart, even breaks the heart," Parker Palmer, a veteran educator, has written. "And the more one loves teaching, the more heartbreaking it can be." Just what that means is depicted in this extraordinary French film.

Daniel (Philippe Torreton) is a teacher and principal of a pre-school in a town beleaguered by the closure of its coal mines. He is a creative, playful, and deeply sensitive educator who gives of himself fully to his pint-sized students. But because he cares so much for their well-being, Daniel is angered by the indifference of the mayor, the inadequacy of social services, and the irresponsibility of parents who haven't taught their children how to speak or act in public. Luckily, he is able to rally the teachers in the school and Samia (Nadia Kaci), a fiery caseworker and pediatric nurse, in an advocacy campaign for the kids.

The inventive screenplay by Dominique Sampiero, Tavernier, and his daughter Tiffany effectively conveys the courage needed to teach, which involves keeping one's heart open in the midst of incredible tension. In this case, Daniel is swamped in a sea of troubles when he tries to help a poverty-stricken mother who doesn't have the money to keep the power on at her apartment, his father is hospitalized with a stroke, and the rebellious son of his girlfriend Valeria (Maria Pitarresi) vandalizes the school with several friends. In addition, the teacher is shamed by an officious bureaucrat who investigates his work.

Throughout the film, Daniel reads in a voiceover from his journal where he vents some of his anger and salutes the abiding presence of nature as a source of sustenance for him. Or, as Alice Walker once put it: "I get energy from the Earth itself. I feel that as long as the Earth can make a spring come every year, I can . . . I won't give up until the Earth gives up."

One of the reasons why It All Starts Today is such a powerful drama is that it makes the point that when you love your work, the only way to get out of trouble is to go deeper. Instead of fleeing, Daniel enters the eye of the hurricane and comes out the other side with renewed energy. In the closing scenes of the film, the children exorcise the demons of poverty, death, and chaos with a party orchestrated by Valeria. All of the teachers, parents, and students who participate have their spirits lifted by the experience. 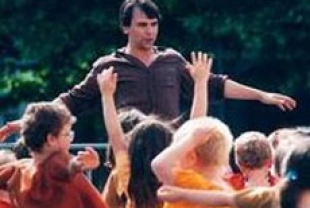