Directed by Carlos Saura
An unflinching and original portrait of this famous Spanish painter's last years as he looks back over the course of his event-filled life.

Spanish writer and director Carlos Saura (Flamenco, Tango) always wanted to make a film about Francisco Jose de Goya (1746-1828), who has been called the father of modern painting. He slowly worked on it in his mind for years and now the finished project is his thirtieth film. It offers an unflinching and original look at the Spanish painter who spent the last years of his long and illustrious life living in exile in Bordeaux, France.

Eighty-two-year-old Goya (Francisco Rabal) exists in a netherworld of illness and confusion as he is taken care of by the last of his many lovers, Leocadia (Eulalia Ramon), and their young daughter, Rosario (Dafne Fernandez). His mind takes him back to the years he spent as a young man (Jose Coronado) as court painter to Charles IV and the royal family. It was during this period that Goya met and fell under the spell of Cayetana, the Duchess of Alba (Maribel Verdu), a rich and powerful seductress who became the subject of several of his most well-known paintings. At 46, the artist went deaf. In the following years he became more and more unhinged by the political turmoil in Spain, especially when the country was savaged during an invasion by Napoleon.

Saura's ambitious and complex film portrait of Goya sticks with the artist's last years when his artistic vision deepened. It is said that the painter once drew a picture of an old man, showing all the signs of his advancing years. Next to the picture is the caption: "I'm still learning." The old man was Goya himself.

In one of the most telling scenes of the drama, Leocadia looks at the "Black Paintings" on the walls of a farmhouse and asks, "Can't you paint something happy?" No, he couldn't, for in the last stages of his life Goya felt compelled to record the atrocities of war in hopes of evoking in viewers an indignant sense of compassion for all the victims of human brutality.

In an essay on this inimitable artist, Andre Malraux wrote: "Goya went on painting, obsessed by that peculiarly intense light which united Titan, Hals, Rembrandt, Michelangelo as death drew near to each. Old men tired of living, but not tired of painting, they care no more for other people, and paint only to please themselves. Painters themselves know what old age means, but their work does not." Carlos Saura evokes and inventively conveys the creative sparks in Goya's closing days. 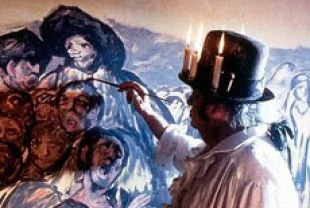 R - some sexuality and violent imagery