Directed by Koji Fukada
A comedy of manners about the ways and the means whereby power-hungry people are able to manipulate humble and kind souls.

Mikio Kobayashi (Kenji Yamauchi) runs a printing business on the ground floor of his home. His second and very young wife Natsuki (Kiki Sugino) handles the financial affairs of the shop and looks after his daughter Eriko (Erika Ono). This little girl is upset when her pet bird leaves the cage and vanishes. Kobayashi's sister Seiko (Kumi Hyodo) lives with them but dreams of a new life in another country. She attends a crime watch meeting where upright members of the community plan how they can rid the park of homeless people and dangerous "foreigners."

Everything changes in Kobayashi's life when Kagawa (Kanji Furutachi) shows up at his door claiming to be the son of an old friend of his father. Although he whimsically calls himself "a slacker," this young wheeler-dealer is quick to seize the job of the only other employee at the print shop when he falls ill and is unable to work. Kagawa then moves into the room upstairs and introduces his wife Anabelle (Bryerly Long), a dance instructor who claims to be from Brazil. She goes topless on the balcony catching the eyes of a nosey neighbor and avid supporter of the effort to rid the community of undesirable people from other places.

One night Kobayashi and Natsuki are forced to listen to the orgasmic grunts and groans of Kagawa and Anabelle. Later the Brazilian, out of boredom, sets her sights on the hard-working printer. Kagawa has been quite busy himself checking up on Natsuki's accounting and a large amount of money that is missing.

Hospitale works as a comedy of manners about the ways and the means whereby power-hungry people are able to manipulate humble and kind souls like Kobayashi. Koji Fukada, the writer and director of this drama, also delivers a harsh criticism of the legendary Japanese xenophobia. As the finale shows, bad things can happen when hostility rather than hospitality is offered to strangers.

Special features on the DVD include a short film, Miyuki, by Will McCord 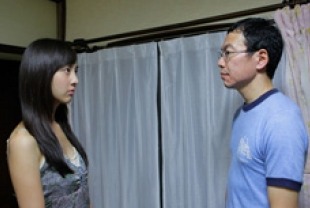 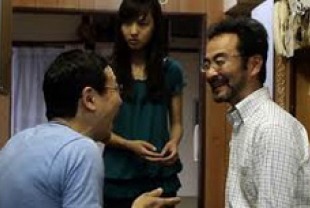 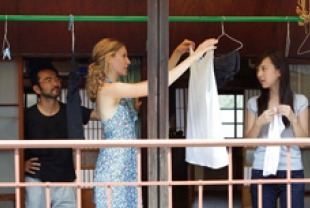 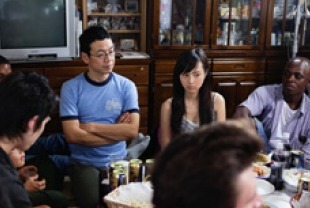 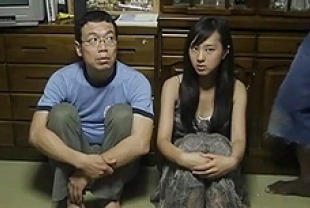