Directed by Raymond De Felitta
An inspiring drama that celebrates the efforts of an ordinary working-class man to follow his bliss on Staten Island.

"Is the life I'm living the life that really wants to live in me?" is a hub question for many people, according to spiritual writer Parker Palmer. In 1956, Buddy Visalo (Michael Rispoli) works at a factory on Staten Island. Years ago when he was in the army, Arthur Godfrey saluted his singing talent and told him to look him up after the war. But his fiancee Estelle (Katherine Narducci) didn't think music was a proper career path and vetoed that option. Years later, Buddy still regrets that he let his dream slip through his fingers.

Now Buddy, who is married to Estelle, sees another chance to live the life that wants to come alive within him. He decides to sink all their money into a two-story Staten Island house. The idea is to start a bar and grill downstairs and put their living quarters upstairs. Only trouble is that area is inhabited by Jim O'Neary (Kevin Conway), a middle-aged Irish drunkard, and his young pregnant wife, Mary (Kelly Macdonald).

On the day that Buddy and his friends from the old neighborhood are about to evict O'Neary, Mary gives birth to a child who turns out to be African-American. O'Neary makes a quick exit, and Mary leaves shortly afterward to try to make a life on her own. Although Buddy is in the midst of repairing the house and building the bar, his heart goes out to Mary and her plight. He secretly sets her up in an apartment and starts seeing her regularly. Whereas Estelle keeps stomping on his soul with her criticism and negativity, Mary lets him know that she believes in him.

Two Family House is written and directed by Raymond De Felitta. It is based on the true story of his uncle who was courageous enough to take a leap in the dark to fulfill his dreams. This flinty and inspiring drama salutes the efforts of an ordinary, working-class man to follow his bliss. There's a price to be paid but Buddy learns that it is all worth it. 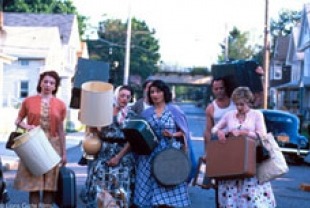