Directed by Paul Thomas Anderson
A fascinating drama about the mysterious relationship between a cult leader and a wayward and violent disciple.

Twitter Facebook Link Print
Share
"We are all sailors on an unknown sea:
may He make us brave enough to accept this mystery."
— Paulo Coelho in Brida

Whether they are called sages, masters, elders, crones, rebbes, gurus, shaikhs, ministers, or priests, teachers play an important part in our spiritual unfolding. They instruct us directly and indirectly through stories, parables, koans, sermons, lectures, and personal example. They recommend readings in sacred texts, assign exercises and tasks to be accomplished, demonstrate devotional acts, and challenge us to reach the sacred fullness of our potential.

The best spiritual teachers open as many doors as they can for their students or disciples and then send them back into the messy world with the wisdom and the spiritual practices they have learned through selflessness and discipline. But other spiritual teachers fall into traps created by ego. The Tibetan Buddhist Trungpa Chogyam calls this "spiritual materialism," which can refer to a lust for power, sexual abuse, greed, paranoia, and a variety of ethical improprieties. Much suffering, pain, and disillusionment has been the result of these excesses on the part of cult leaders.

There has been a lot of discussion about whether or not this film written and directed by Paul Thomas Anderson is a direct portrait of L. Ron Hubbard, the controversial founder of Scientology, and those who want to explore the story on that level are free to do so. We are much more interested in Anderson's dramatic probe of the mysterious connection between a charismatic guru and the disciple he singles out to take on as his special project. In the sparks that fly between them, we are given a chance to consider our own views on spiritual teachers, faith, community, and loyalty. In addition, Anderson offers us an incisive critique of the essential battle of the 1950s between the established wielders of power and wealth versus those free spirits who refuse to be tamed. Although the "fabulous Fifties" have been the source of much nostalgia, it was really a turbulent time where Beatniks and nonconformists denounced the values of a consumerist society.

Freddie Quell (Joaquin Phoenix) is a troubled young man who barely survives his service in the Navy during World War II. When given a Rorschach test, all he can see in one card after another is female and male genitalia. He does not return to the young girl (Madisen Beaty) he thought he loved in his home town in Massachusetts. Instead, he drifts from one unrewarding and unfulfilling job to another, as a department store photographer and a laborer in cabbage fields. The only thing that sustains him through the years is an addiction to potent cocktails he concocts from paint thinner, household cleaning supplies, and other strange ingredients. Drinking on a regular basis puts him in a permanent stupor. He is a rebel without a cause.

That's the condition he's in when he crashes a party on a yacht traveling to New York City. Lancaster Dodd (Philip Seymour Hoffman) is the leader of a therapeutic quasi-religious cult called the Cause. He is hosting the wedding of his beautiful daughter (Ambyr Childers) and Clark (Rami Malek). Both of them, along with Dodd's son (Jesse Plemons) are part of his roadshow workshop on human potential. His perky wife Peggy (Amy Adams) is his manager and fierce protector from all who want to discredit his mental time travel theories, his emphasis on past lives, and his questionable therapeutic sessions.

From the moment they meet Dodd is fascinated and attracted to Freddie, whom he calls "my protege and my guinea pig." This cult leader believes that our animal nature must be subdued so that we can get in touch with our inner perfection. He wants to prove that people are not ruled by their emotions. Freddie with his verbal inarticulateness and hyena-like laugh is pure animal — an anti-social, angry, and violent man. Part of Dodd wants to save this unruly outsider who is more than eager to beat up anyone with a hostile word against the Master. The outsider's unpredictable behavior alienates Dodd's family, who fear he is a threat to their success.

An impressive mix of ingredients make this film so poignant and memorable. Philip Seymour Hoffman is astonishing as Dodd whose cynical son thinks he is a con man who is just making things up as he moves from one gathering to another. The actor authentically conveys the shadow sides of the cult leader. His need to dominate is evident in a scene when he does an intense one-on-one session with Freddy. His arrogance comes to the fore in a speech where he claims to be able to bring peace to the world, and his anger overtakes him in a confrontation with a critic of his work and then later with a true believer (Laura Dern) who's having trouble adapting to his changed program for transformation.

There is a vulnerability in Joaquin Phoenix which serves him well in The Master. As Freddie, he plays a self-destructive, violent alcoholic with mental problems who has been looking all his life for someone who sees the flawed person he is but accepts him anyway. Phoenix's stiff body movements, hunched shoulders, and the way he puts his hands on his hips convey the tension he carries in the flesh. His animal nature overwhelms most women and frightens others. Freddie's love/hate relationship with Dodd is translated magically in their last scene together where the Master sings him an a cappella version of "On a Slow Boat to China." That's one of many songs from the 1950s used effectively on the film's score by Jonny Greenwood.

Except for Magnolia, we have not been fans of the other films of Paul Thomas Anderson. This one shows off his artistry with a skillful blend of outstanding photography, music, and acting. Best of all, Anderson has put on the screen the mystery of human nature which draws a cult leader to a barely literate vagabond and plays out in a series of surprises that baffle them both. In their close-encounter, we witness the 1950s clash between the established order and the individualism of those who sought to break free from the restrictions of those wielding wealth and power. 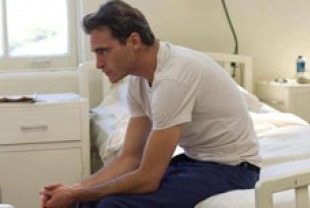 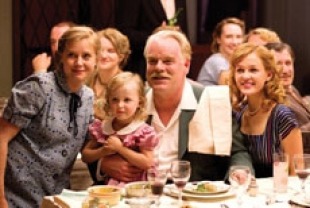 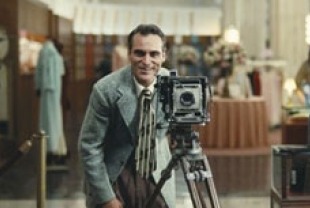 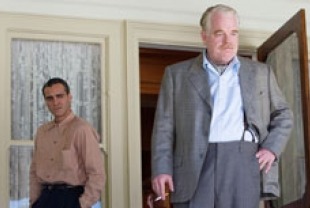 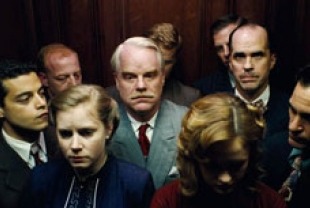