Directed by Michael Haneke
A poignant and provocative French-language drama about the tenderness, discipline, and patience involved in being a loving caregiver.

"A good relationship has a pattern like a dance and is built on some of the same rules. The partners do not need to hold on tightly, because they move confidently in the same pattern, intricate but gay and free, like a country dance of Mozart's."

In Amour, the Palme d'Or Award-winning film at the 2012 Cannes Film Festival, writer and director Michael Haneke has created a poignant and provocative drama about unconditional love, old age, illness, caregiving, and dying. It is also about the elegant dance of a long-lived and fulfilling marriage.

Georges (Jean-Louis Trintignant) and Anne (Emmanuelle Riva) are retired piano teachers in their eighties. They live in a luxurious Paris apartment filled with light and a large library of books and CDs. In the living room, a grand piano stands in dignity as a shrine to their love and passion for classical music.

They attend a recital given by one of their most gifted students, Alexandre (Alexandre Tharaud). and returning home on an emotional high, the gentlemanly Georges compliments Anne on how pretty she looks. It is the small intimate moments like this that knit together a marriage and solidify long-term commitment.

The next morning as they are eating breakfast, Georges notices Anne not responding to him as she stares blankly at the wall. In a panic, he wets a cloth at the sink and pats her face and neck. When she still doesn't seem to be aware of what's happening, he goes to call for help, leaving the faucet running. Then he hears the water shut off. He returns to find Anne unaware that anything has happened.

It turns out she has had a stroke. She visits a doctor and is admitted to the hospital for tests. Another stroke leaves her half-paralyzed and confined to a wheelchair. After this terrible experience, Anne elicits a promise from Georges to never take her to the hospital again.

"Caring for another person is not about orchestrating the tasks of the day so that we can do it 'right.' It is about letting go of our ideas and making room for the two people who are here in this place, in this moment. It is the freedom to be who we are and to open our hearts to ourselves and to those
in our care."

— William and Nancy Martin in The Caregiver's Tao Te Ching

For a while, Georges' energy, discipline, and patience is enough to carry this couple through the ordeal of Anne's declining emotional and physical state. He lovingly and tenderly attends to all her needs, and although she stubbornly rebels against being so dependent on him, there is no other way for her to live.

Their daughter Eva (Isabelle Huppert) visits and she has a hard time accepting her mother's debilitating condition and her father's huge role as caregiver. In a telling encounter with their former student Alexandre, Anne reads in his face the mixture of shock and sadness over her plight. It is enough to send her into seclusion and vow not to see other people.

After another stroke leaves Anne unable to speak coherently and crying out in pain, Georges hires some part-time nurses to help him look after her. He spends nearly all his time at home but does attend a funeral; telling Anne about it, he is highly critical of both the minister and the service. Eva visits again but he does not want her to see her mother and locks the bedroom door. When Anne refuses to eat or drink water, Georges reaches a breaking point.

Amour is directed by Michael Haneke, a gifted Austrian whose films have set a new high standard for meaning-making works of art.This poignant, touching, and tender French drama is one of Most Spiritually Literate Films of 2012.

At one point, Georges describes to his daughter the looming impermanence of all human life and the fact that few of us can escape the consequences of the physical and mental decline that comes with old age: "Things go downhill, then it'll all be over." The love that brought Georges and Anne together has not diminished over the years; it has just changed its course with her illness and his acceptance of the onerous duties, disappointments, and drama of caregiving. We cannot recall any other film to rival this one in the breadth and depth of its depiction of what it means to look after a loved one who ailing and completely dependent on you. Amour also challenges to think about death.

"What we fear about death is the loss of control."

— Ram Dass in One Liners

There are three scenes in Amour which you will want to ponder before determining their importance and meaning. In the first, Georges captures a pigeon that has flown into the apartment and then sets him free. In the second, he has a dream about a hearing a noise in the hall; when he goes to investigate, he finds himself up to his knees in water and then someone seizes him from behind. In the third, Georges tells Anne the story of his trip to camp as a child, his battle with diphtheria, and his mother's strange visit to him in the hospital.

Like the Catholic monks and the Buddhist meditators of long ago, Amour compels us to think about death and how we relate to it: Do we see it as a transition to another world or as a dark descent into nothingness? Are we willing to embrace death as a friend or do we want to battle valiantly against it? Is it best to gracefully surrender to it or can we profit from trying to control it? Be open to these questions as you experience Amour, and remember it will probably be a long time until a film will touch upon these spiritual subjects so deeply.

Special features on the DVD include the making of Amour and a Q & A with director Michael Haneke. 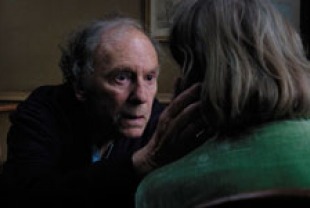 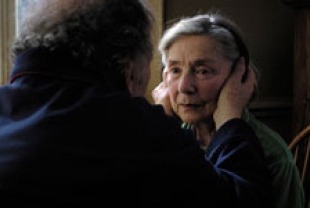