Directed by Bob Rafelson
A heated-up drama about sexual passion and obsession.

Psychoanalyst Robert Stoller's research into eros has led him to believe "sexual pleasure in most humans depends on neurotic mechanisms." He argues further that ordinarily there is no sexual arousal without scripts — the dramas and fantasies people create in their minds to trigger sexual excitement. Stoller's conclusion: the same psychic factors found in perversion are located in the sexual lives of most people — hostility, risk, illusion, and aggression.

Jack Nicholson is just right as Chambers, a man with a criminal past and a macho allure. Jessica Lange's (King Kong) portrait of Cora is an affecting study of a masochistic romantic. There is very little tenderness in what Chambers gives her, and the animalistic sex-on-the-kitchen-table scene sets the tone for their fevered couplings. Cora endures his loving because she can't help it. But her enslavement to passion is soured by anxiety over wanting sex so badly.

After a first bungled attempt at murdering Nick, Frank and Cora succeed and are then arrested for murder. A slick lawyer capitalizes on the greed of the insurance companies and gets them off on a technicality. But not before Frank and Cora reveal their hostility for each other.

They go back to the Twin Oaks an unhappy couple. The risk and mystery of their sexual attraction are gone. However, when Cora returns from a visit home for the death of her mother, they find a new source of strength for their relationship. She's going to have a baby. But fate turns the knife and their lunge toward true love is upset in a surprise finale.

Playwright David Mamet has reworked James M. Cain's 1934 novel, emphasizing the story's theme of sexual obsession. The Postman Always Rings Twice signals the welcome return of Bob Rafelson to directing movies. His last work was Stay Hungry (1976). Together the writer and director have used the sexual elements in the film as a catalyst to precipitate truths about human nature which are larger than the parameters of sex — faith, hope and charity. 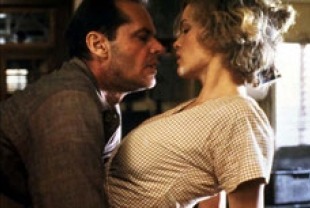