Directed by Sacha Gervasi
Fascinating portrait of the marriage and creative partnership of Alfred Hitchcock and his talented wife Alma Reville.

It is 1959 and the successful American director Alfred Hitchcock (Anthony Hopkins) has just finished making North by Northwest. During an interview, he is asked: "You're the most famous director in the history of this medium, but you're 60 years old, shouldn't you just quit while you're ahead? " Hitchcock has no intention of stopping but he is convinced that he wants to do "something fresh, something different" in order to stir up the passion that propelled him to direct films in the first place.

Hitchcock comes upon Psycho, a novel inspired by the true-life story of a Wisconsin serial killer. But even with all his prior success, the director has trouble convincing the head of Paramount Pictures (Barney Balaban) to distribute the film until he offers to shoulder the $800,000 budget himself. Hitchcock's talented wife Alma Reville (Helen Mirren), a screenwriter, is not sure she wants to risk their glamorous Bel Air home to pay the bills. Their marriage is going through a rough patch due to his obsession with the latest in a string of blondes, Janet Leigh (Scarlett Johansson), cast as the lead in Psycho, and Alma's collaboration with a young screenplay writer, Whitfield Cook (Danny Huston), who is infatuated with her.

Sacha Gervasi directs this biopicture and makes the most of the wit, the presence, and the creativity that veteran actors Anthony Hopkins and Helen Mirren bring to their roles. The screenplay by Gervasi and John J. McLaughlin (Black Swan) helps us see the large role Alma played in the creation and eventual success of Psycho. It is fascinating to watch this couple's partnership play out as they work together on every detail of the movie, demonstrating the professionalism, unusual approaches, and determination that makes for excellence in filmmaking.

One of the magical moments in the drama takes place during the premiere of Psycho. Hitchcock stands in the lobby and like an orchestra conductor waves his arms in sync with the soundtrack that is raising the fears of the audience as they respond to the horrific shower sequence where Janet Leigh's character meets her grim death. Another magical moment shows the clever Hitchcock getting the best of the Motion Picture Association of America's chief censor (Kurtwood Smith). The one misstep in the screenplay is having Hitchcock haunted by the imagined presence of Ed Gein (Michael Wincott), the Wisconsin serial killer. There is no need to add another demon to dominate the consciousness of a man who already has enough of his own to deal with including voyeurism, alcohol, and over-eating.

Special features on the Blu-ray/DVD combo include: a deleted scene; "Becoming the Master: from Hopkins to Hitchcock"; "Obsessed with Hitchcock"; director Sacha Gervasi's behind the scenes cell phone footage; Hitchcock Cell Phone PSA; the story; the cast; Danny Elfman Maestro; Hitch and Alma; Remembering Hitchcock; a commentary with director Sacha Gervasi and author Stephen Rebello; and a theatrical trailer. 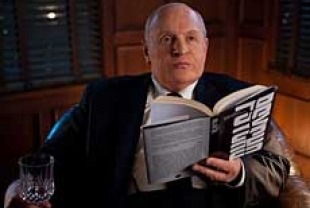 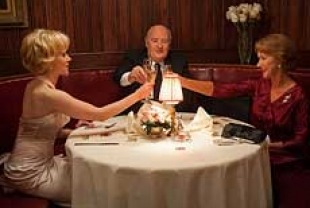 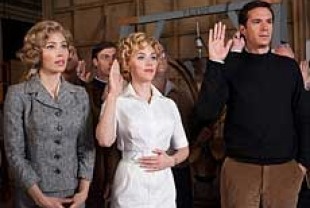 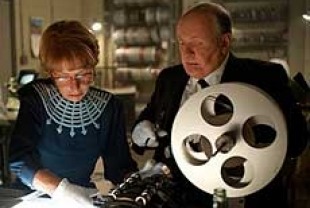