Directed by Gus Van Sant
An engrossing and thought-provoking drama about fracking, big money, small town life, saving the environment, and trying to live with integrity in hard times.

A huge boom in natural gas production is happening in America. As the country tries to reduce its dependence on foreign oil, companies have started drilling in 34 states where large shale fields hold gas deposits. To increase the yield, they use a process called fracking, pumping chemical laden water into the ground to create more fractures in the rocks around the gas. Many environmental groups, scientists, and the documentary Gasland argue that fracking is an environmentally dangerous process that is harmful to the earth, the water supply, and the health of people and animals. Yet the companies using fracking discount these issues and continue to promote natural gas as a "clean" alternative to coal and oil.

Now independent maverick filmmaker Gus Van Sant has made an engrossing and horrifying film about fracking and one small community's response to those who want to purchase its natural gas deposits promising to make everyone rich. The original screenplay by Matt Damon and John Krasinski is adapted from a story by Dave Eggers. It is both substantive and rich in character development and thematic scope.

Steve Butler (Matt Damon), a small-town farm boy, has hit the big time with an offer to become vice-president of one of the largest and most profitable natural gas companies in the world. He has a good record on getting whole communities to sign leases to allow gas drilling. He leaves Manhattan on the bus (an old habit) and arrives in McKinley, New York, where he and his sarcastic sales partner Sue Thomason (Francis McDormand) have been ordered to convince as many citizens as possible to sign their drilling rights over to his company; they promise that eventually this move will bring the landowners anywhere from $100,000 to a million dollars.

The small town is struggling during hard economic times and so some people are willing to sign quickly. The mayor, who is looking out for his own interests and hits Steve up for a contribution, makes a pitch in support of fracking. Things seem to be going well for Steve and Sue until Frank Yates (Hal Holbrook), a science teacher at the high school, raises the alarm about the environmental consequences of fracking. Doing research on him, they discover that he is a former university professor and prestigious scientist respected by all.

Steve isn't particularly upset by this opposition to his mission but he begins to lose focus when he meets Alice (Rosemarie DeWitt) who has a heart-to-heart conversation with him in the local bar; she owns a farm and doesn't want to see the community's way of life change. Things heat up even more when Dustin Noble (John Krasinski), an environmental activist, arrives in town to convince the townsfolk not to sign the leases. He puts on an impressive demonstration of the dangers of fracking at the school where Alice teaches. He also wins over a band of rowdy locals by singing karaoke. The final insult comes when Dustin takes Alice out on a date.

Promised Land lends more evidence to the continuing clash between rich and powerful corporations who believe they can buy whatever they want and the people who stand in their way, either with what they still own or through their activism. Increasingly, ordinary people are getting sick and tired of wheeler-dealers and city know-it-alls and their lack of respect for small town America. This conflict comes across loud and clear in this engrossing ethical drama.

The twist at the end of Promised Land is both credible and thought-provoking. Hats off to Van Sant, Damon, and Krasinski for daring to deal with such a timely and morally explosive subject!

Special features on the two-disc combo Blu-ray/DVD include an extended scene and the making of Promised Land. 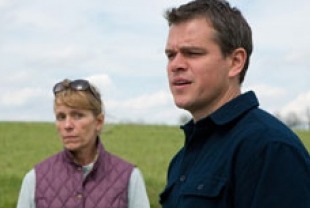 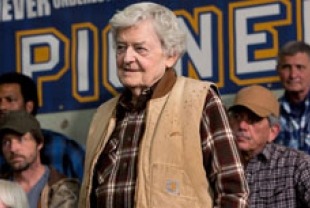 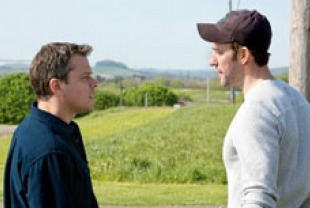 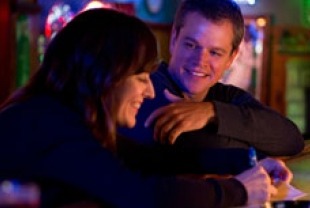