Directed by Taylor Hackford
An ambitious adaptation of Frank Deford's novel about three tumultuous decades in the lives of a Washington Redskins football star and his fans.

In Taylor Hackford's Everybody's All American, Gavin Grey, a Louisiana football star who led his team to victory in the Sugar Bowl, marries Babs, the Magnolia Queen, in 1957. He goes on to play for the Washington Redskins while she raises four children and stands In the shadows, over the years, Gavin's nephew, Donnie, keeps in touch with the golden couple. Lonely and frustrated by financial troubles, Babs relies on his visits; he's the only one who makes her feel special. Then with his best years behind him, Gavin retires from pro football in 1981 and goes to work at a golf club.

The screenplay by Torn Rickman based on Frank Deford's novel conveys how the Greys must come to terms with a marriage that has drastically changed. Dennis Quaid gives a richly developed performance as the athletic superstar whose glory days cannot sustain him in middle age. Jessica Lange is ebullient as Babs, a woman who starts out as a demure southern belle and ends up as a confident and competent businesswoman. Timothy Hutton is Donnie, the intellectual bystander who worships Babs and wonders why she stays with Gavin. In the film's plucky and uplifting finale, the Greys face the challenge of renegotiating their relationship and of failing in love with each other all over again. 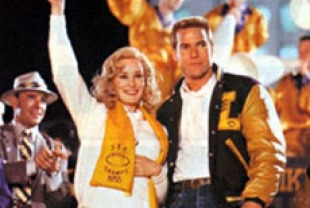