Directed by Tom Gilroy
A marvelous movie about an unlikely friendship that slowly unspools between two parks department employees.

Here is a marvelous movie about a friendship that slowly unspools between two unlikely souls. We often don't get very excited about these strange alliances, especially when those involved have little in common with each other. Unlikely friends give each other plenty of space to do their own thing. Differences may sprout up — age, religion, class — but they manage to create their own unique adventures.

Paul (Liev Schrieber) is an ex-con who has just been hired by the parks and recreation department of a small New England town. His partner is Murph (Ned Beatty), who's been at the job for a long time. In the course of a year, beginning in the spring and moving forward through the turning of the seasons and various holidays, these two very different men draw close together in friendship.

Recently paroled from prison for the armed robbery of a Dunkin' Donuts store, Paul is a hothead who has a short fuse, especially in the presence of authority figures. He almost loses his new job on the first day by ridiculing a rich man (Campbell Scott) whom he feels has dissed him. Paul is even more embarrassed when he makes a comment about the fellow's masculinity only to learn that Murph's adult son is gay. Despite this shaky start, the two workers reach out to each other in subtle ways.

Murph patiently listens to Paul's rambling accounts of the spiritual books he's read and his views on karma. Paul tries to clean up his language since it bothers his partner. They encounter a homeless friend (Ian Hart) of Murph's son and a dog owner (Peri Gilpin) who takes a fancy to Paul and convinces him to take a puppy home. The two friends really bond during a pot-smoking ritual when Murph opens up and shares a secret he's never told to anyone else.

Written and directed by Tom Gilroy, Spring Forward is one of the best films of the year. He has drawn out top-notch performances from Schreiber and Beatty that are perfectly natural. "The older we grow," Albert Schweitzer once wrote, "the more we realize that true power and happiness comes to us only through those who spiritually mean something to us. Whether they are near or far, still alive or dead, we need them if we are to find our way through life. The good we bear within us can be turned into life and action only when they are near to us in spirit."

Near the end of the film, just before Murph's retirement, Paul reaches out and saves the life of a deranged woman who's been the victim of domestic violence. Knowing just what it feels like to be treated as if you're nothing, he meets her in her isolation and pain with love and patience. He has learned these skills from Murph. His retirement gift to his partner is a tiny replica of The Hand of Fatima, his tribute to a friend who reached out and gave him a second chance. We all need someone like this if we are to find our way through life. Such friends are lifelines. 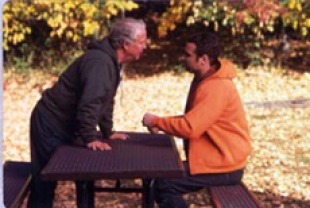