The Way, Way Back

Directed by Jim Rash, Nat Faxon
A feel-good comedy and coming-of-age film where a shy teenager opens to the adventures of life during a summer vacation.

Fourteen-year old Duncan (Liam James) and his mother Pam (Toni Collette) are going to spend the summer at her boyfriend Trent's beach house, along with Trent's daughter Steph (Zoe Levin). Things get off to a bad start when during the drive Trent asks Duncan how he would rate himself on a scale of 1 to 10. Duncan, who is very shy and unassertive, fumbles around for an answer and says "6." Trent disagrees and says he sees him as a "3." The teenager is both humiliated and enraged.

Upon their arrival at the beach, they are immediately welcomed by Betty (Allison Janney), a boozy neighbor who can't wait to share the latest gossip about what's happening in the neighborhood. Later Duncan's social awkwardness comes to the fore when Betty's daughter Susanna (AnnaSophia Robb) tries to have a brief conversation with him.

While Trent and Pam party with his friends Kip (Rob Corddry) and Joan (Amanda Peet), Duncan finds a bike in the garage and rides around town, ending up at the Water Wizz amusement park. The playful and often crazy owner of the place is Owen (Sam Rockwell), a Peter Pan male who has never grown up. He offers Duncan a job and tries every trick in the book to make him smile or laugh. But this tense teenager is humor-challenged. .

Nat Faxon and Jim Rash wrote and directed this feel-good comedy which is filled with magical moments. These two creative souls won an Oscar for writing the screenplay for The Descendants

Duncan is transformed over the summer as he finds his voice and connects with his true self. We marvel at the intuitive way he sheds the Trent's manipulative efforts to become his stepfather and goes off to discover his own father figure. At the water park, he is embraced by the community; it is positively delightful to watch this uptight adolescent do a breakdance number and earn the nickname "Pop 'n' Lock." He soon understands Owen's jokes and is in on some of them. (Who could not laugh out loud, as we did in the screening, when Owen asks for a volunteer by reciting the chorus of Bonnie Tyler's "Holding Out for a Hero.".) Duncan also decides to speak the truth to his mother about what a cad Trent really is.

Protestant preacher Ted Loder has observed: "Laughter is a holy thing. It is as sacred as music and silence and solemnity, maybe even more sacred. Laughter is like prayer, like a bridge over which creatures tiptoe to meet each other. Laughter is like mercy; it heals. When you can laugh at yourself you are freed."

Duncan and Owen tiptoe across a bridge to meet one another and the result is not only peals of laughter but an uplifting portrait of teenager who is transformed into a new person.

Special features on the DVD include deleted scenes; behind-the-scenes featurettes: "A Tour of the Water Park", "The filmmakers: Jim and Nat" and an ensemble featurette. 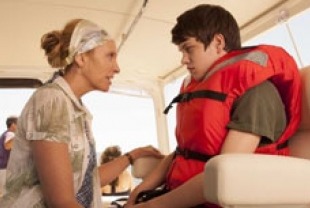 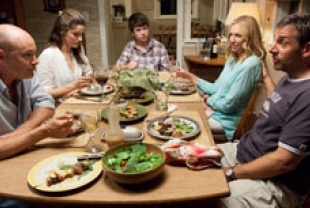 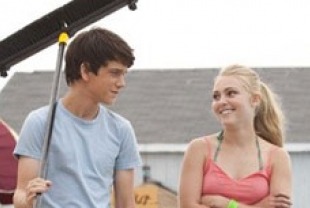 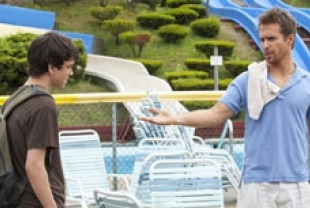 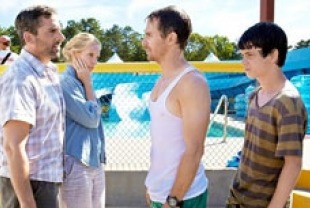