Directed by Thomas Vinterberg
A chilling Danish drama about how an accusation of child sexual abuse can tear a community apart and shatter even the trust of long-standing friends.

Lucas (Mads Mikkelsen) is trying to get back on his feet after losing his teaching job and getting divorced from his wife who has custody of their teenage son Marcus (Lasse Fogelstrom). Luckily, Lucas has landed a job at a local kindergarten school where he is wildly popular with the kids. In addition, he has begun an affair with Nadja (Alexandra Rapaport), a foreign co-worker. Through all his troubles, Lucas has enjoyed the constant companionship of his old dog.

This middle-ager regularly gets together with a band of rowdy men from their small Danish town who go deer hunting and drink excessively. On one occasion, one of his buddies develops a cramp after jumping into a pond and Lucas saves him from drowning. On another evening, he takes his best friend Theo (Thomas Bo Larsen) home after he gets too drunk to walk. Theo's wife Agnes (Anne Louise Hassing) appreciates his kindness. Their little daughter Klara (Annika Wedderkopp) develops a crush on Lucas and is hurt when he rebuffs her. Using porn images seen on her brother's iPad, she makes up a story about Lucas exposing himself to her.

Grethe (Susse Wold), his supervisor, is convinced that children are innocent and should be taken seriously if they talk about sexual abuse. Although refusing to tell Lucas the source or even the exact nature of the charge, she orders him to take some time off. An amateurish child psychologist interviews Klara, and the matter is referred to the police. When Marcus arrives, he stands with his slowly unraveling dad who has been ostracized by the entire community. Only one friend Bruun (Lars Ranthe) believes he is innocent.

The Hunt is a Danish film directed by Thomas Vinterberg (Celebration) who also wrote the riveting screenplay with Tobias Lindholm. It is very hard to watch how easily the bonds of trust and friendship are shattered after a sexual abuse accusation is set in motion. Lucas is banned from the kindergarten and assaulted at a store where the owner says he can no longer shop. During the Christmas season, a hateful act designed to hurt him plunges him into a deep depression. The gossip continues to circulate until the circle of accusers widens. We cannot give away any more details about the finale except to say that it left us numb with shock at the unrelenting rage against those who are thought to have sexually abused children.

Special features on the DVD include outtakes/deleted/extended scenes; "Making of The Hunt; and an alternate ending. 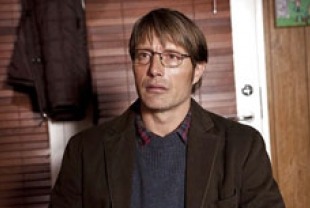 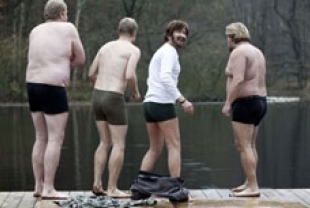 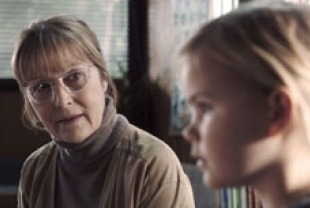 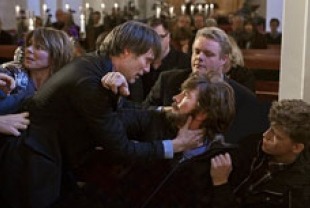