Directed by John Ankele
A timely, soul-stirring mapping of Christians enriching their faith with insights from Zen Buddhism.

In our increasingly pluralistic world where more and more people are coming in contact with different religions, Christians are talking with Muslims, Buddhists, Hindus, and others about their faith and their practices. Many believers in Jesus are taking this one step further by identifying themselves with more than one religion. Call it "multiple religious belonging" or "multiple religious participation," which John H. Berthrong has defined as "the conscious use of religious ideas, practices, symbols, meditations, prayers, chants, and sensitivities derived from one tradition by a member of another community of faith for their own personal uses."

Another way of talking about this phenomenon is John Dunne's view that one's spiritual journey may involve "passing through" from one religion to another and returning home with a deeper and enriched appreciation and understanding of one's own path. Producers Jon Ankele and Anne Macksoud's extraordinary documentary Jesus & Buddha maps this interspiritual development better than any other film around. It opens doors for all who seek to consider the manifold ways in which "double belonging " might renew their faith. At just 45 minutes long, it is perfect for discussions in churches, sanghas, and other settings.

These two sensitive and creative fillmmakers call themselves "old dogs saddened by the suffering we see all around us and moved to take action." They note that wise Tibetan lamas were called "old dogs." They have sniffed out the spiritual challenges facing those who are willing to step into the dark as they search for solutions. The director, Ankele, is an ordained minister in the Presbyterian Church and a student of Zen and Shambhala Buddhist traditions. Ann Macksoud spent 17 years as a teacher before transitioning to film and video production. Both of them view their work as the equivalent of two decades of "enrichment courses."

The filmmakers have certainly done their homework well in selecting the three major spokespersons for this innovative and thought-provoking documentary on the interface between Buddhism and Christianity, between Buddha and Jesus. 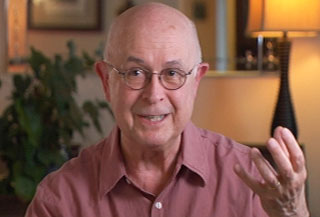 Paul Knitter is Paul Tillich Professor of Theology, World Religions and Culture at Union Theological Seminary. His most recent book is Without Buddha I Could Not Be A Christian: A Personal Journey of Passing Over and Passing Back. On the documentary, he speaks with clout about experiencing the reality of God, the emphasis in Buddhism on the interrelatedness of all things, and the significance of grace on the Christian path. Buddhism has reminded him that truth is to be found in this world. He rejoices in the two definitions of God as love and as Spirit and then concludes with a bang:

"Gautama Became Buddha because he woke up. Jesus, the son of Mary, became Christ, the Son of God, because he woke up to the divine spirit that was given to him in his very being. What it means to be human is to wake up to, to be open to, the spirit of God that is given to us in our very beings. Our problem is that we don't know it. We don't trust it. But when we realize it, it becomes power, energy, transformative, or what Christians call ‘grace’!" 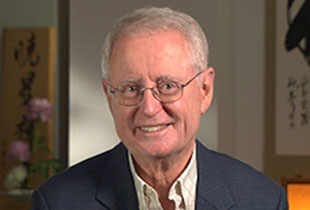 Father Robert Kennedy is a Jesuit priest and Zen teacher in the White Plum lineage. He taught theology for many years at St. Peter's College in New Jersey and as a young man studied with Yamada Rochi in Kamakura, Japan, with Maezumi Roshi in Los Angeles, and later with Glassman Roshi in New York. He was installed as sensei in 1991 and was conferred Inka (his final seal of approval) in 1997 by Glassman Roshi. He is the author of Zen Gifts to Christians and other books.

Zen is a skill, according to Father Kennedy. Faith does not have to enter into it, but it also does not negate faith. Regular Zen meditation adds luster to daily life. One of the main teachings of this path is the acceptance of impermanence: everything changes and eventually dies. Kennedy is pleased that both Buddhism and Christianity approve of the emptying of the self. He explains what this means:

"The words of Jesus that we must 'die to our very self' — when we first hear it sounds almost impossible or cruel. It is only later that we realize that it is mercy itself, because the 'self' that we cling to doesn't exist. That is what Zen meditation is all about. Yamada Roshi said to me, 'I'm not trying to make you a Buddhist, I am trying to empty you in imitation of your Lord Jesus Christ who emptied himself.' " 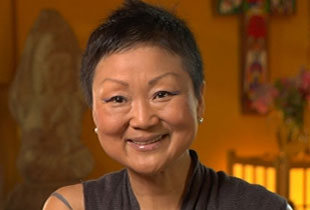 Chung Hyun Kyung is Professor of Ecumenical Theology and Interfaith Engagement at Union Theological Seminary and a Buddhist Dharma teacher in the Kwan Um School of Zen. She trained with Seung Sahn Sunim and Thich Nhat Hanh. She is a peace activist and an author of many articles and books on eco-feminist theologies and peoples' movements, all based on her research in Asia, Africa, and Latin America.

Speaking with great enthusiasm and charisma, this South Korean theologian provides an entertaining report on her initial encounter with the seer who would become her teacher. She has some interesting things to say about suffering, meditation, sitting with the question "Who am I?" and the "don't know mind" which lies behind the mysteries of the human adventure. As Thich Nhat Hanh put it, we need to become "empty of our fixed nature." Emptiness, she adds, is not what many think it is:

"It is very difficult for young Western students to understand emptiness. They think emptiness is feeling lonely or unloved, but Buddhist emptiness is not meaningless or nihilistic — it is really fullness, a vortex of life energy where everything is interconnected and everything comes out of it. You're wide open and you say, 'Ah, wow! This is new, how interesting.' That is emptiness!"

All three of these Christian-Buddhist practitioners agree that living in the present moment is essential. "It will provide," concludes Professor Chung, "all that we need."