Directed by Baillie Walsh
An entertaining documentary about Bruce Springsteen, his loyal fans, and his impact on their lives.

It's obvious that rock-and-roll superstar Bruce Springsteen loves his fans. His live concerts are legendary for the energy he puts into every performance and the ecstatic responses of his devoted fans. At age 63, Springsteen is still going strong and performing around the world. To watch him work a crowd of anywhere from 50,000 to 100,000 people is to experience the exhilaration of a master at work, feeding off the enthusiasm of the undulating bodies and the power of the music generated by the E Street Band.

When director Baille Walsh set out to make a documentary about "the Boss," as Springsteen is called, he decided not to do the usual concert film. Instead he asked Bruce's fans to contribute personal video clips about what he means to them. The response was great; the documentary incorporates the efforts of more than 2,000 fans from around the world. Said producer Ridley Scott, "This beautifully crafted film provides a unique insight into the powerful bond between a recording artist and those who connect so profoundly with his music." For fans and those who wonder what the fuss is all about, this two-night event is not to be missed.

Throughout the film, fans share three words which come to mind when they think of Bruce: joy, passion, hope, heart, ferocious, intimate, and many more. Among the lucky fans whose videos are included in this film are:

• a cute little girl who likes Bruce because he really "makes an effort" in his concerts as evident by the veins popping out of his neck and his sweating;

• a British girl who held up a sign saying "I'll be your Courtney Cox" and was invited to dance with Bruce for "Dancing in the Dark;" she tells the story while walking in a park, and then we are treated to archival footage of her moment on stage.

• an Elvis impersonator from Philadelphia whose dream was for the "King to play with the Boss," and we watch the film of it happening;

• a Scandinavian fan who recalls bonding with a stranger and being brought to tears when Bruce sang "Blood Brothers";

• a young man who was just jilted by his girlfriend is hugged by Bruce and assured that everything will be okay;

• a European woman who says "Bruce and I have been friends since 1985, though he doesn't know me."

• a sarcastic man whose wife is a Springsteen fan complains that his concerts are way too long;

• a middle-age man driving a car starts crying after describing how Bruce's lyrics enable him to empathize with so many people experiencing both sadness and triumphs;

• a British man recalls how he saved up his money to travel to New York for a concert and was "upgraded" from a seat in the top rows to front and center by a mysterious man who said he worked for Bruce;

• a young Asian woman who drives trucks across the country celebrates Springsteen's appreciation of working-class individuals like herself;

• a mother who has a huge collection of Springsteen memorabilia introduces her son who shares the story of his close encounter with the Boss;

• a former street musician shows video of the day when Bruce was walking down the street and joined him for a jam session;

• a female fan recounts how she felt during her first Springsteen concern when she was in 9th grade; during the sax solo in "Jungleland," she just knew that her life was completely changing. Bruce to her is a serious person, a sex symbol, and a hero.

At the beginning of the film, Bruce and the E-Street Band greet a huge stadium audience with a wall of sound. "Where we want to go," Bruce yells to the crowd, "we can't get there by ourselves. We need you." For a lot of people — including us — the feeling is mutual. 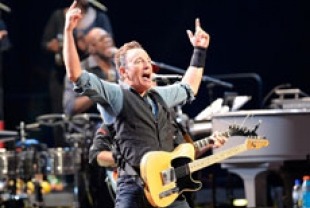 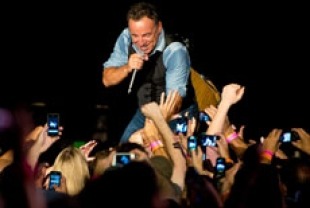 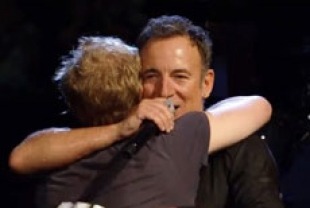 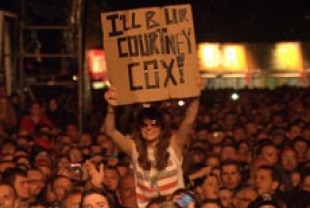 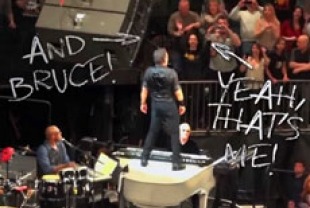