Directed by Jem Cohen
A wonderfully slow movie that presents a parade of wonders about the beauties and delights of art, city life, and friendship.

Museum Hours is one of the most Spiritually Literate Films of 2013. It takes within its erudite embrace the touching tale of a woman watching over the death of her cousin in a foreign land, a platonic friendship which provides two lonely souls with the chance to share their stories, a tribute to art and the intricacies of art criticism, and a love letter to the city of Vienna. Writer and director Jem Cohen has fashioned a contemplative film that moves slowly as it ponders the mysteries of human nature and the beauties and the bounties of art. Best of all, it offers a tender and lyrical look at the fragility of life and relationships in a world where everything changes and passes from one form to another.

Johann (Bobby Sommer) is a guard at Vienna's Kunsthistorisches Art Museum. He's worked there for six years and still doesn't get tired of wandering the premises and enjoying the pleasure that comes with long looking at the art of masters. Johann once was the manager of a heavy metal band and so the silence of the museum balances off the noise which once surrounded him. In a whimsical moment, he confesses that he's asked for directions to the bathrooms more than anything else.

Johann, who is gay, now lives alone and entertains himself playing online poker or drinking beer at his favorite pub. One day, he meets Anne (Mary Margaret O'Hara), a middle-aged woman from Montreal, who needs directions to a hospital where her cousin lies in a coma. Johann, a quiet man with a big heart, offers his services as a local guide and translator for her dealings with the doctors. Anne talks and sings to her relative in hopes that she will be energized and encouraged by what she hears. Johann gets her a free pass to the museum and they spend time together looking at the paintings.

The art work of Pieter Breughel, a sixteenth-century Dutch painter plays a major role in the film. We learn from the intelligent lecture of an art guide and scholar (Ela Piplits) that the artist is known for his habit of drawing attention to peripheral characters and details in his paintings. For example, in his painting on the conversion of St. Paul, the emphasis is not on the main subject who has fallen from his horse to the ground but on a little boy off to the side who is wearing a suit of armor that is too big for him. When a Christian in the tour group disagrees with the guide, she responds "There's no reason we all have to share my opinion."

The art gallery is always busy with people standing in front of the paintings and taking in what comes to them. In his voice-over narrative, Johann reflects on art, money, politics and sex. In one sequence, the filmmaker comments how teenagers on school outings momentarily stop texting and acting bored when they discover paintings of severed heads and sexual situations. In a fantasy sequence, the director has few museum-goers suddenly transformed into nudes just like the people in the canvases they are viewing.

Even as the artists whose work is displayed in the museum open our eyes to the wonders around us, the filmmaker tries to show us the marvels of the city of Vienna — its architectural beauty, traffic patterns, flocks of birds, slums, factories and polluted emissions, refuse on the streets, pubs and entertainment spots. We find ourselves thinking about how we could see our world with different eyes.

Museum Hours is the kind of film we were wishing for when we called for a Slow Movie Movement. Sure, it demands patience and a total immersion in its many moods and parts. But it offers so much in return. Relax, breathe in and breathe out slowly, let yourself enjoy the parade of wonders. Take in the "ah!" moments of walking through the art gallery; of relishing the paintings; of seeing a city afresh; and of cherishing the tender unfolding of the transitory friendship between Johann and Anne. 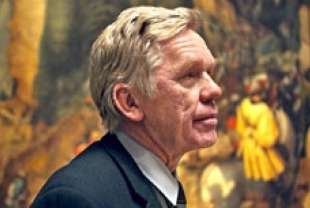 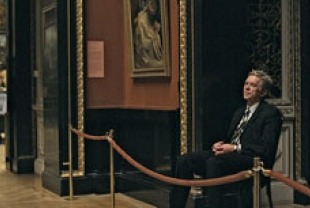 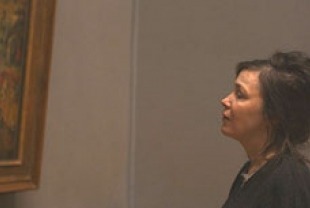 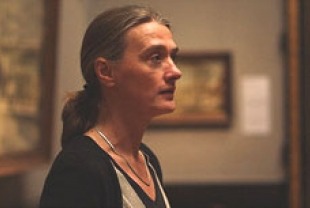