From Up on Poppy Hill

From Up on Poppy Hill is a lovely Japanese hand-drawn animated film set in the hilly city of Yokohama in 1963. Umi (voiced in the English version by Sarah Bolger) is a high school junior does the cooking and cleaning in the boarding house run by her grandmother. This hard-working girl looks after her two younger siblings. Their mother is studying in America, and their father was reported killed during the Korean War when his ship was sunk. Umi still hopes against hope that her father will return and has a morning ritual of raising signal flags in the yard facing the harbor.

Shun (Anton Yelchin) is the leader of a band of teenage boys who are protesting the proposed demolition of an old building called the Latin Quarter that they have been using as a clubhouse. When Umi first sees the place, she is impressed with the variety of groups meeting there including a philosopher, some boys doing scientific experiments, a photography club, and a newspaper. Shun talks her into joining them in an effort to change the mind of the school chairman (Beau Bridges) who wants to tear down the building to make room for a more modern one. Umi surprisingly turns out to be the one who most impresses the businessman and convinces him to visit the building; meanwhile, the boys and girls have been cleaning up and repairing the place. Drawn together for this common cause and attracted to each other, Umi and Shun must face another challenge that threatens to keep them apart.

From Up on Poppy Hill is directed by Goro Miyazaki and written by his famous father Hayao Miyazaki (My Neighbor Totoro, Spirited Away, Howl's Moving Castle, Princess Mononoke) and Keiko Niwa. It is so delightful to see a touching human drama unfold in an animated feature without an evil monster or a wise-cracking animal. Umi is a heroine worth emulating given her kindness, politeness. and respect for all things.

Special features on the DVD include feature-length storyboards; a featurette about the celebrity cast recording the voices; an interview with Goro Miyazaki; the music video; a Yokohama featurette; plus the original Japanese trailers and TV spots. 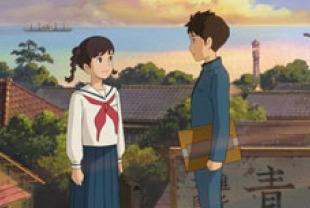 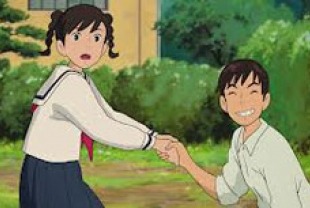 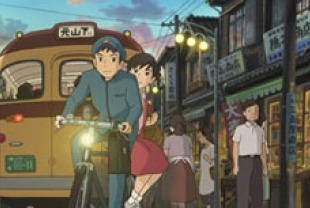