Directed by Francis Lawrence
A teenage girl as a hero in-the-making animated by her feisty independent spirit, survival skills, selflessness, and courage.

Being a winner doesn't feel very good to 16-year-old warrior and rebel Katniss Everdeen (Jennifer Lawrence). She was picked as a "tribute" to represent her poor community, District 12, in the Hunger Games, an annual event designed by the people in the "Capitol" to remind other parts of the country of Panem that any resistance to their rule is futile. She and the other District 12 tribute, Peeta Mellark (Josh Hutcherson), survived the terrifying battle in the arena (chronicled in the first movie of this franchise, The Hunger Games) and have returned home. They've been given luxurious accommodations and enough money to live very well, but the trauma of battle still replays itself in her mind. For relief, she goes into the woods to join her best friend Gale (Liam Hemsworth) hunting for meat to share on the black market. He's now working in the mines.

Katniss and Peeta are about to embark on their victory tour of the 12 districts of Panem, a propaganda device used to remind the citizens of what's at stake in the Games. She is shocked by a surprise visit to her home from President Snow (Donald Sutherland) who warns her that her every move is being watched and that unless she proves her loyalty to the regime on the tour, she, her family, and friends will be executed. It is most important, he explains, that she convince the people that she and Peeta are in love and that love alone was behind their last-minute threat in the games to commit joint suicide unless they were both allowed to survive. Their actions have been seen in the district as an act of resistance, and there have been uprisings. Snow will not allow Katniss, a.k.a. the Girl on Fire, to become a symbol.

"I had to do that. At least once,"
Gale says after kissing Katniss.

Is a kiss enough to lift her spirits? Katniss welcomes Gale's affection but has so many things dampening her body and soul. Some parental critics of The Hunger Games trilogy have suggested that it promotes war and violence. But Katniss is a warrior who has no love of war. She has symptoms of post-traumatic stress syndrome — nightmares, flashbacks, and avoidance of those nearest to her. There are plenty of other movies that celebrate soldiers as heroes no matter who the enemy is — see Captain Phillips and Zero Dark Thirty. But this one, like other dystopia movies, has exaggerated the warps and excesses of the present in order to enable us to see them more clearly. No one wins in war; violence must not be glorified.

He is advising them to be careful that the weight of celebrity not crush them on the victory tour to "feed the monster." This process is orchestrated by the fascist state as a diversion to keep the citizenry from seeing the poverty and helplessness afoot in Panem. On the tour through the country aboard a luxury train, Katniss and Peeta try to look like young lovers for their many appearances on television. As a ploy to keep everyone happy, they announce their engagement. All of us recall the many times that as teenagers (and even as adults) we adopted a "persona" in order to get by and be accepted by those in power.

The victory tour also reveals another phenomenon of contemporary culture: winning, stardom, and heroism are so intertwined that it is hard to tell them apart. What is authentic heroism?

"Last year's was child's play," says Haymitch to his protégés

The upcoming 75th Hunger Games is known as a Third Quarter Quell; every 25 years a special element is added to the Games. This time, it's that the tributes will all be past winners. Katniss and Peeta are headed back into the arena.

President Snow turns to Plutarch Heavensbee (Philip Seymour Hoffman), the new chief gamemaker, for help in stacking the deck against Katniss who definitely seems to be the favorite of the districts. What he most wants is to expose her as a someone who cannot be trusted. Among those she will have to deal with are a tech geek Beetee (Jeffrey Wright), his smart partner Wiress (Amanda Plumber), an angry young woman Johanna (Jena Malone), and handsome gladiator Finnick (Sam Clafin) who participated in a previous Games at the tender age of 14.

Among the hazards Plutarch has created are invisible force fields, a fog of poison gas, a band of aggressive monkeys, birds that mimic the voices of the tributes' loved ones, and a tropical habitat with little drinkable water. Katniss demonstrates her great survival skills once again while trying to look after Peeta and make sure he stays alive during this ordeal.

At first we think that Wiress, one of the older tributes, is a muttering worn-out woman in shock from what they are going through. But she has insight and reveals the nature of the spinning island and when they can expect to encounter various hazards.

"Tick tock" echoes in our ears, too. It's a familiar pressure to those who us who feel bewildered and beleaguered as we face new challenges and threats in every hour. Surviving means dealing with whatever comes up and having the resilience to bounce back to face the next challenge.

In Catching Fire, we see more of the character qualities which make Katniss a hero in the eyes of so many of the oppressed people in District 12 and elsewhere. Selflessness and empathy are two hallmarks of her personality which come to the fore in her visit to Rue's district. She was the youngest tribute in the games, an ally whom Katniss could not save.

Loyalty and courage are two other obvious character qualities. These are recognized and supported by Cinna, the designer assigned to help her win the attention of backers to supply needed help in the arena. We sense that Cinna (and some of the others) are grooming Katniss for an important role in the revolution to come. She has what's needed to overcome a fascist regime.

"It must be very fragile, if a handful of berries can bring it down," Katniss says to President Snow about his totalitarian regime

The Hunger Games: Catching Fire is based on the second book in a young adult trilogy by Suzanne Collins; the third will be made into two movies to be released in 2014 and 2015. The books and the first film have been wildly popular, and this one will please fans and newcomers to the series alike.

Jennifer Lawrence as Katniss conveys the many sides to her character: a young girl's desire to just be with family and friends, a rebel's determination to go her own way, a warrior's persistence and perseverance, a caring person's vulnerability, a lover's commitment to what is best for those she is close to. It's no wonder so many moviegoers are identifying with her.

Lawrence is surrounded by an accomplished cast, especially Josh Hutchinson, who has grown into the role of Peeta, convincing us of his maturity and compassion. Add to this stunning set design — from the different districts to a lavish Capitol party to the menacing arena. Woody Harrelson is solid as Haymitch, bringing a greater sense of competence to his coaching this time. Lenny Kravitz is strong, supportive, and totally sympathetic as Cinna. Stanley Tucci is appropriately over-the-top as Capitol TV star Caesar Flickerman. And Donald Sutherland manages to convey extreme menace with an almost casual air. He reminds us of the banality of evil.

This series is not what you'd call "escapist entertainment." Rather than avoiding the problems of our times, it gives us perspective on them and an opportunity to discuss them. Note government spying on its citizens. Check out the gap between the rich who reside in the Capitol and the poor in districts. See how force and violence are justified when used on critics of the regime. Remember how citizen uprisings have recently rocked regimes in the Middle East.

Prim: "Since the last games, something's different. I can see it."
Katniss: "What can you see?"
Prim: "Hope."

The Hunger Games: Catching Fire is, above all else, about the power of the spiritual practice of hope. We see how it is supported by patience, courage, and persistence. We witness how it mobilizes people to take risks and confront injustice. We feel its healing balm even in the most difficult situations.

"I'm not going anywhere. I'm going to stay right here and cause all kinds of trouble," says Katniss

• Where do you see beacons of hope?
• Who best expresses your yearnings for a better and more just world?
• Who gives you the support and encouragement you need?
• What are the sources of your hope for the future?
• What can you do to bring about positive change? 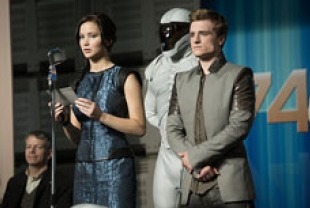 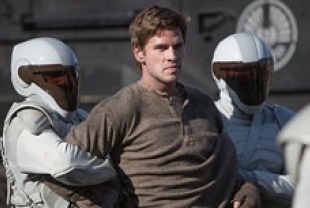 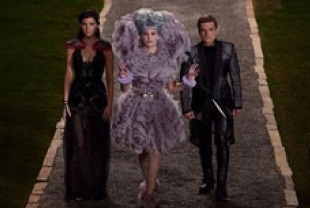 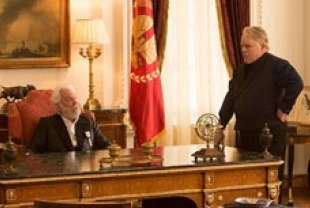 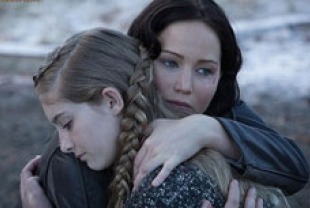 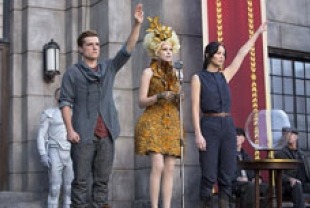 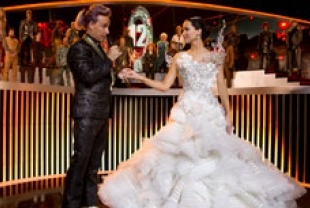 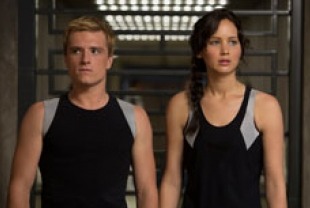 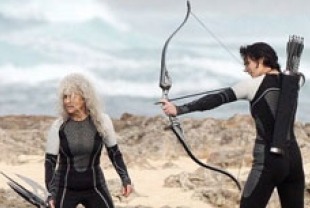 30 Movies about Dystopias: Films that reflect the fears and excesses of contemporary societies