Directed by Ritesh Batra
An extraordinary Indian movie about love, loss, and yearning.

The legendary Dabbawallahs of Mumbai, India, deliver millions of lunchboxes a day thoughout the city. They pick up containers packed by housewives and using public transportation take them to the husbands' desks. One delivery man in the film notes that this unusual system was assessed in a Harvard University study which concluded that only one in a million lunchboxes goes to the wrong person. This elegant and emotionally affecting drama written and directed by Ritesh Batra is the story of an unusual friendship that results from a misdelivered lunchbox.

Saajan (Irrfan Khan) is a lonely accountant who is getting ready to retire. He is a widower who keeps to himself on his job and is seen as a grumpy old man by the kids in the neighborhood whom he orders to be less noisy with their games on the street. He has arranged to have a lunchbox delivered from a restaurant in his neighborhood. One day he opens it and feasts on some unusually tasty food.

Ila (Nimrat Kaur) is a middle-aged wife and mother with a daughter whose husband (Nakul Vaid) ignores her and brushes aside her question of whether they should have another baby. In order to regain his attention and to give him pleasure, she cooks him a series of mouth-watering Indian dishes. Her upstairs neighbor, whom she calls "Auntie," provides her with cooking tips.

In "How to Write a Letter," Garrison Keillor points to a few of the joys found in this form of communication: "To be known by another person — to meet and talk freely on the page — to be close despite distance. To escape from anonymity and be our own sweet selves and express the music of our souls."

When her husband comments on food that she did not cook, Ila realizes her lunchbox is going to someone else. She puts a note in it, and Saajan responds. Soon they are sending letters back and forth each day. She shares her sadness at being in a loveless marriage and her discovery of the scent of another woman on her husband's shirts. Saajan muses on death, noting that he will end up in the vertical burial grounds: "I've spent my life standing in trains and buses, now I will have to stand even when I'm dead." Both of them are stuck in unfulfilling lives; should they go to Bhutan with its emphasis on Gross National Happiness?

Meanwhile, at the office, Saajan is saddled with Shaikh (Nawazuddin Siddiqui), an exceedingly gregarious young man who has been chosen to take over his job. At first, the older man and seasoned veteran of detailed work is irritated with Shaikh's nonstop talking. Then as this orphan opens his heart, they move toward a comfortable father-son relationship. In a touching scene, Saajan is a witness at Shaikh's wedding, the only person on the groom's side.

These three characters come from different worlds. Saajan is a Catholic; Ila, a Hindu, and Shaikh, a Muslim. Yet they easily open up to each other when given the opportunity to share the stories of their lives. "I think we forget things if we have no one to tell them to," suggests Saajan. Fortunately, all three are willing to take a chance on someone else.

The Lunchbox is an extraordinary drama about love, loss, and yearning. It's a beautiful illustration of the encouraging life lesson that "sometimes the wrong train will get you to the right station." 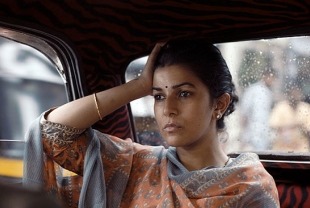 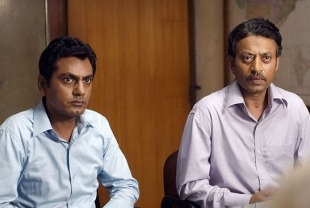