Directed by Alastair Fothergill, Keith Scholey
A delightful portrait of a year in the lives of a family of brown bears.

In the kingdom of spirit animals, the bear signifies grounding forces and strength. It has been revered for centuries as a powerful totem, inspiring those who need courage to stand up to adversity. As a spirit animal in touch with earth and the cycles of nature, the bear is a powerful guide to support physical and emotional healing.

Some of these virtues and qualities are revealed in Bears, the fourth film in the Disneynature series. Directed by Alastair Fothergill and Keith Scholey, this beautifully crafted documentary focuses on how a mother bear named Sky and her two young cubs, Scout and Amber, successfully navigate the dangerous first year of the cubs' lives.

The cubs are born in the cave their mother has dug for the winter hibernation. When spring comes, they head out into the snow-covered Alaskan wilderness in search of food. Naturally it is a delight to watch the playfulness of the two little ones as they do somersaults, lick each other, and frolic in their new environment. But all is not fun and games for this family. Early in their trek, they barely miss being submerged beneath a deadly avalanche of snow. Along the way Amber stays close to Sky, often perched on her back, while Scout follows behind, usually distracted by anything out of the ordinary that he sees.

When they final reach an area where other bears have gathered, Sky must constantly be on the lookout for Magnus, the dominant alpha male bear, and Chinook, an outcast bear. Both of them are very hungry and capable of devouring Sky's cubs without regret. There is also a wolf, Tikaani, who keeps stalking Scout and Amber. In each of these incidents, Sky's savvy and courage keep her cubs safe.

Key to the family's survival through the summer and especially during the next winter's hibernation is eating enough grass, clams, and especially salmon to build up their fat reserves. They fish along the shoreline and upstream at a salmon pond.

We were not particularly fond of the whimsical narration by John C. Reilly, which sometimes struck us as anthropomorphizing the bears. But the voice-overs do give us many fascinating facts about bears, such as: Sky will need to eat 90 pounds of fish a day before winter in order to be able to nurse her cubs through their hibernation; a bear's nose is seven times more sensitive than a bloodhound's. The movie's official website even has an Educator's Guide. We especially liked the score by George Fenton which accents the suspense and the joyful moments of this bear family's incredible journey. 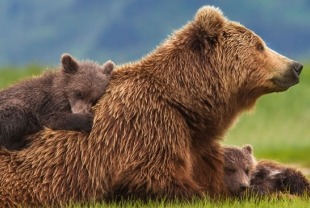 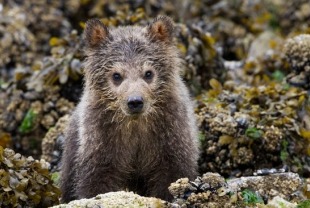 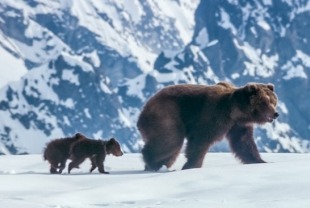 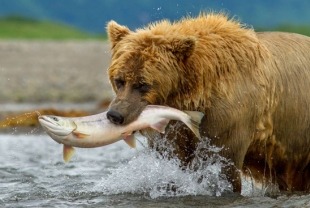