Directed by Anna Asante
A costume drama featiuring a beautiful mixed race heroine, an idealistic law student, and older aristocrats whose most cherished traditions are challenged.

From its mysterious opening scene of a Royal Navy Admiral rescuing a little black girl from squalor and poverty to its joyous finale, Belle is an immensely appealing old-fashioned costume drama. Set in eighteenth-century England, it has beautiful sets and clothing, sophisticated characters, and vivid drama revolving around class, slavery, racism, idealism, and love. Director Amma Asante has brilliantly orchestrated all of these elements into one of those very memorable movies that challenges us with its rounded treatment of the quest for equality and touches our hearts with a truly delirious love story.

In 1769, Admiral Sir John Lindsay (Matthew Goode), who is about to go back to sea, takes young Dido (Lauren Julien-Box), his illegitimate mixed-race daughter, to live with his wealthy Uncle Lord Mansfield (Tom Wilkinson), the highest chief justice in the land, and his imperious wife (Emily Watson). Although it is Dido's birthright to reside in this household, her relatives are constantly forced to deal with the racism and gossip of their peers who are shocked at the presence of this black outsider. In their eyes, she has no right to be there except in the role of a servant. That is why when guests come for dinner, she waits in the parlor until they are finished eating. She complains to Lord Mansfield: "I am too high to eat with the servants, too low to eat with you at dinner."

Despite the prejudice she must endure, Dido (Gugu Mbatha-Raw) grows into a pretty and intelligent young woman. When her father dies, she inherits a fortune from him. She and her half-cousin Lady Elizabeth Murray (Sarah Gadon), have grown up together and are very close. They share details about the procession of young men who are courting them. Dido's wealth gives her the advantage of being able to marry whomever she chooses, whereas Sarah must marry well in order to secure her future.

When the pushy Lady Ashford (Miranda Richardson) learns that Dido is rich, she allows her son Oliver (James Norton) to court her. Her other son James (Tom Felton) toys with Sarah but has no intention of marrying her, given her lack of property. In one of the film's most powerful scenes, he manhandles Dido and in so doing lets her know the fierce hatred he and many other members of the upper class have for her.

On the other side of the English racism divide is John Davinier (Sam Reid), the son of a clergyman, who is serving as Lord Mansfield's legal apprentice. He falls in love with Dido as soon as he sees her but she fends him off until she knows more about the Zong massacre of 1791 in which 142 disease-ridden Africans being transported as slaves were tossed into the sea and drowned so the owners might claim insurance for their damaged "cargo." Lord Mansfield is about to make a ruling on the case, which could be a turning point in the anti-slavery movement. Dido is impressed by the zeal with which Davinier speaks out against the slave trade and the treatment of blacks as disposable goods.

Based on true events when England was a slave trading colonial empire, Belle seems remarkably contemporary in its depiction of class distinctions, the influence of money, and the quest of women for freedom from being controlled by men. Most of all, it is a beautiful story of two soulmates. We share the growing love in Belle's eyes when Davinier declares "Human beings cannot be priced. Humans are priceless." That's a message for our times as well. 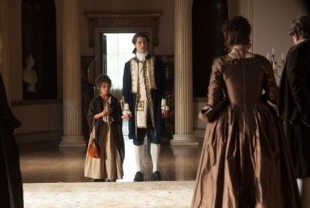 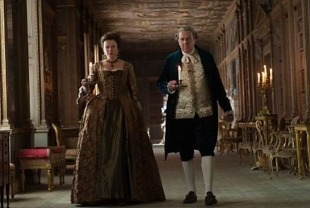 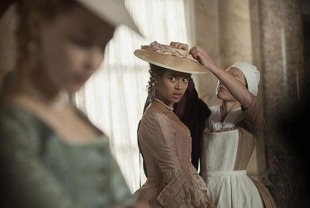 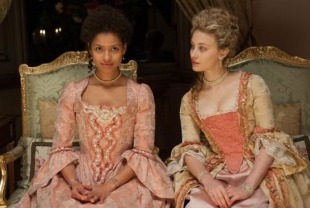 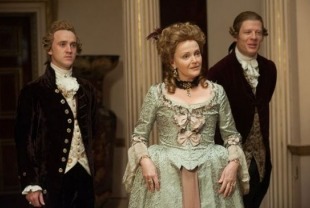 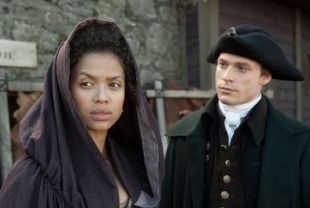