Directed by Clint Eastwood
A biopicture about the pop music group worth seeing for the playful and melodic songs.

Once the playful and melodic music of the Four Seasons takes over your body, you will find your feet tapping on floor and your hands slapping your thighs. In this rowdy version of the play, which won a quartet of Tonys in 2006 including Best Musical, the four members of the band share their stories — speaking directly to the camera.

John Lloyd Young who originated the role on Broadway plays the sincere and sweet falsetto tenor Frankie Valli. He grows up in working-class Belleville, New Jersey, where his controlling buddy Tommy DeVito (Vincent Piazza) introduces him to small-time crime and then, after hearing him sing, brings him into his band as the lead singer. Thanks to the interventions of Angelo "Gyp" DeCarlo (Christopher Walken), the local mobster, Valli is able to fulfill his dream of being a musician instead of ending up in prison like so many other Jersey boys.

The other main contributor to the success of the Four Seasons is Bob Gaudio (Erich Bergen), an incredibly gifted songwriter whose hits propelled the band into stardom — "Sherry," "Walk Like a Man," "Rag Doll," "Bye Bye Baby," "Let's Hang On," and "Can't Take My Eyes Off You." In one of best moments in the film, we learn that Gaudio wrote "Big Girls Don't Cry" after watching a scene in the movie Ace in the Hole where Kirk Douglas slaps Jan Sterling in the face.

Also starring in the film are Michael Lomenda as Nick Massi, the bassist in the band, Mike Doyle as producer Bob Crewe, Renee Marino as Frankie's unhappy wife Mary, Freya Tingley as his resentful daughter Francine, and Joey Russo as a young and aggressive pr man Joe Pesci.

As director, Clint Eastwood spends a lot of time with the feuds between DeVito and the other members of the band but manages to steer the emphasis back where it belongs to the music of Frankie Valli and the Four Seasons. Be sure to stick around for the finale where all the characters in Jersey Boys are reunited on the screen for a rousing song and dance number! 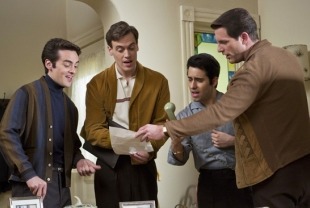 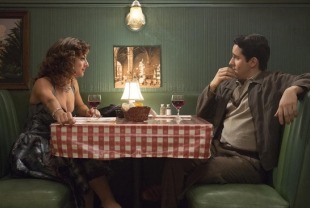 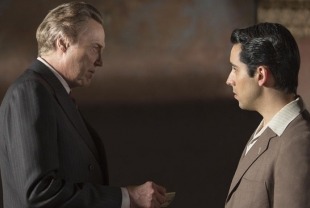 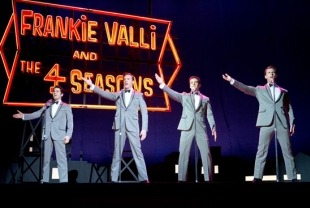