Directed by John Carney
A romantic drama that captures and conveys the healing power of music.

If you loved Once and are a great believer in the healing power of music, this romantic drama will speak to your heart, mind, body, and soul.

Gretta (Keira Knightley) is an English woman living in New York who has written some soulful ballads about her life and loves. When Steve (James Corden), a street singer, calls her up on stage to sing in a pub, she reluctantly agrees. Although the drinking crowd is not taken by her sad song about loneliness in the city, Dan (Mark Ruffalo), a longtime music producer, happens to be there that night. In his mind's eye, he orchestrates her melodic ballad.

Dan has just been fired from the record company he founded because of his unwillingness to accommodate himself to the latest trends in the music business. Also plagued by a dry spell in his creativity, he's been drinking way too much. But this night he follows his gut instincts and asks Gretta to let him represent her. She claims that being famous or successful does not interest her; she writes and sings for personal satisfaction. What's really going on is that she has just broken up with her boyfriend, Dave Kohl (Adam Levine), because he has admitted to being with another woman. They had come to New York together, after being living and music writing partners for five years. Now he has a big record contract and his career a singer/songwriter is taking off whereas she feels abandoned on the sidelines.

Then Dan comes up with an inventive strategy of recording a demo album of her songs in various outdoor locations all over New York City. In the background are the everyday sounds of the metropolis: police sirens, car horns, and the rumble of subways. They hire a funky group of musicians to play in an alley, on the roof of a building, on a subway platform, and in Central Park. Gretta agrees to collaborate with Dan on this out-of-the-box project. Sensing his alienation from his teenage daughter Violet (Hailee Steinfeld), Gretta gets her involved playing bass guitar on one session. Dan is so excited by how the project is going that he invites his ex-wife Miriam (Catherine Keener) to watch them record.

With Begin Again director Jim Carney reveals the same high regard for music that he did with Once. The two stars are able to convey both real emotional vibrancy, lending authenticity to their relationships. The ballads on the soundtrack are pleasing to the ear, but the most notable thing about this romantic drama is the depiction of the delights and satisfactions that come to Dan and Gretta because of their unadulterated love of music.

Music has offered us many opportunities to measure our experience, take stock of our feelings, and trace the shape of our values. We have been swept away by the folk music of Harry Chapin whose story songs touch the heart and encourage us to empathize with other people. We have revered Bruce Springsteen and his assertive brand of rock music. His ballad "Badlands" speaks to the rebel inside us who knows "that it ain't no sin to be glad you're alive."

Dan in Begin Again captures what we've noticed when he and Gretta are listening to music on a city street corner and watching the activity around them. "What I love about music," he says, "is that even the most banal scenes are suddenly invested with meaning." Earlier in the film, she dismisses the idea that a musician needs to look a certain way, with the comment that "music is about ears, not eyes." But music can change what our eyes see.

Music is also often a healing balm for those in pain and desperate for a deeper connection with others. In his passionate and monumental song "Music," John Miles sings:

"Music was my first love
And it will be my last.
Music of the future
And music of the past.

To live without my music
Would be impossible to do,
In this world of troubles
My music pulls me through."

John Carney's Begin Again depicts the soulful coming together of Dan and Gretta who let the music pull them through their troubles. In the most romantic scene in the film, they share their earbuds and walk through the city listening to each other's playlists. In this magical movie, music is a kiss across the abyss. 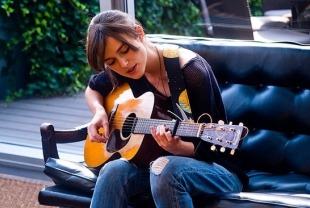 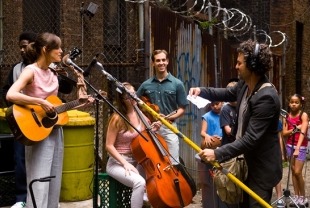 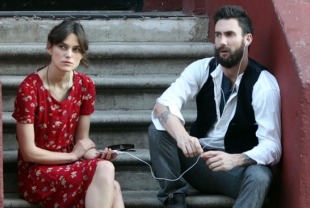 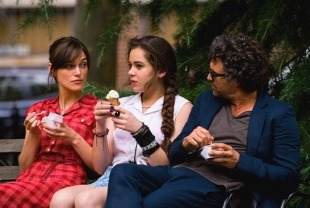