Rabindranath Tagore - The Poet of Eternity

Directed by Partha Bhattacharya
A uplifting tribute to this truly extraordinary Indian poet, polymath, and philosopher.

Rabindranath Tagore (1861-1941) was an Indian poet, philosopher, songwriter, choreographer, painter, essayist, playwright, and novelist; he was the first non-European to win the Nobel Prize for Literature. In this documentary tribute to the multi-talented Indian mystic, Partha Bhattacharya uses celebrations in Paris on May 12, 2010, by UNESCO to kick off events honoring Tagore elsewhere in the world. There are recitals of his poetry and pleas for translators to gather all his poetry in English. The Japanese have released 15 volumes of Tagore's works.

Groups are shown performing his songs and dances which were choreographed by Tagore. It is amazing to hear about Tagore from his contemporaries such as Mahatma Gandhi, Jane Addams, Albert Schweitzer, Albert Einstein, and Bertrand Russell. They lauded him for being a universal man, a pioneer of unity who respected diversity, and a guru for all humankind.

The director has found a stellar mix of modern-day people of influence to join the chorus of praise of Tagore as an innovative educator, a strong supporter of women's rights, and as a peacemaker. Among those featured are His Holiness the Dalai Lama, Prince Charles, Jane Goodall, Deepak Chopra, and Nobel Laureate Aung San Suu Kyi. Although Tagore wrote India's national anthem, he was highly critical of both nationalism and imperialism as paths leading to conflict and chaos.

Newcomers to this extraordinary figure are sure to find plenty to ponder in this portrait of an Eastern Renaissance man with multiple talents and ample genius. We love the little things you can pick up from a documentary like this one. Tagore taught his children in their home which he called "the Living University." A reverence for the natural world was the foundation of their education. He loved trees and in one of his poems wrote: "Trees are the earth's endless effort to speak to the listening heaven." 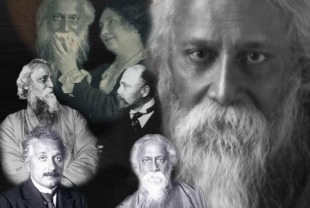