Do the Right Thing

Directed by Spike Lee
A cautionary tale set in the ghetto about the racial hatred that still remains an open wound on the soulscape of America.

Spike Lee produced, directed, wrote, and stars in Do the Right Thing, a powerful and poignant portrait of contemporary urban life. He plays Mookie, an employee at Sal's Famous Pizzeria run by Italians who commute from Bensonhurst to Brooklyn's Bedford-Stuyvesant. Mookie's deliveries take him through this poor black neighborhood on the hottest day of the summer.

Among the idiosyncratic members of the community are a drunkard nicknamed Da Mayor; three street-corner philosophers who have low opinions of everyone who passes by; a stutterer who sells postcards of Dr. Martin Luther King, Jr. and Malcolm X; a radio deejay who calls himself Mr. Senior Love Daddy; and Mookie's Puerto Rican girlfriend and mother of his illegitimate son.

Danny Aiello gives the most compelling and dramatic performance of his career as Sal who after 25 years of serving the community says proudly: "These kids grew up on my food." His oldest son Pino, however, is a vicious racist who can't stand the fact that his brother Vito is a friend of Mookie's.

The free-floating racial tensions of the community are ignited when Buggin Out, a troublemaker, orders Sal to put up some pictures of blacks on the pizzeria's "Wall of Fame" for Italian-Americans. He's backed up by Radio Raheem, who then refuses to turn off his boom box radio inside Sal's place. The trouble escalates when Sal angrily smashes the radio, the police arrive, and Radio Raheem is killed by an overzealous cop. Mookie responds by throwing a garbage can through Sal's window, and the mob destroys the place while he watches from the sidelines.

Do the Right Thing is a cautionary tale that graphically depicts the racial hatred seething just beneath the surface in cities across the country. It is a scary and sad glimpse of the divisive bigotry that still remains an open wound on the soulscape of America.

The DVD release includes commentary by Spike Lee as well as an interview with the production's editor, Barry Brown. A "making of" featurette includes behind the scenes footage and a film-to-storyboard comparison. 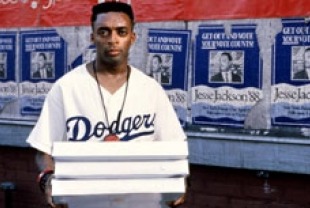 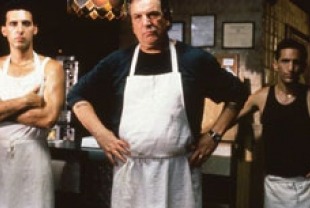