Directed by Mitra Farahani
A documentary about an arrogant and weird Iranian artist living in exile in Rome.

Bahman Mohassess was a well-known and respected painter and sculptor in Iran before the 1979 Revolution. After that, the religious regime had trouble with the sexual explicitness of the male sex organ in his sculptures. In 2006, the homosexual artist moved to Rome and set up shop in a residential hotel.

Mitra Farahani, a woman filmmaker, approaches Mohassess for permission to make a film about him. As a sign of his controlling nature, he says, "I'll tell you my life story so that no idiot can write a biography on my behalf." The director accedes to most of his demands.

Fed up with the direction of his homeland and turned off by the warps of a world of oil slicks, capitalist greed, and wars, Mohassess destroys many of his paintings and sculptures. When two artistic brothers Rokni and Ramin Haerizedeh come for a visit, he is happy to receive their praise for his output. They want to commission him to do a new work but then get caught up in the idea of purchasing all the art he has with him in Rome. The artist regales them with stories about Picasso and Dali, shares his favorite film (Visconti's The Leopard), and talks about his impending death.

Mohassess certainly lives up to the typical man-on-the-street opinion of artists as weird, arrogant and critical creatures. 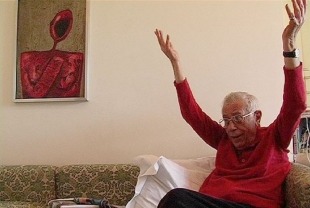