Directed by Lasse Hallstrom
An enchanting movie about family solidarity and the soulful dimensions of cooking.

As a young boy in Mumbai, Hassan is taught by his mother the fine arts of cooking. With the patience and sensitivity of a Zen master, she teaches her eager son the secrets of taste, the love and patience that are needed in the kitchen, and the best techniques for creating mouth-watering dishes. This gifted woman is killed when their restaurant is attacked and burned down by a rampaging mob after a political election.

Papa Kadam (Om Puri) takes his large family to London where Hassan (Manish Dayal) comes of age experimenting with Indian cuisine using the family's prize spice box. But it's too cold in England and the vegetables there have "no soul," so Papa decides they should look for a location for their own restaurant in France. When some of the children protest that Europe is not home, he expresses the sentiment that pervades their life: "Wherever the family is, there is our home."

In the south of France, the family's car's brakes break down near a village. They discover an empty restaurant there that looks perfect. But the children protest that is 100 feet across the road from Le Saule Pleureur, a Michelin-starred establishment run by the widowed Madame Mallory (Helen Mirren). She has a reputation in the community for being a snooty perfectionist who is totally consumed by her work.

Having successfully run the last restaurant owners across from her out of town, this competitive woman uses every trick in the book to embarrass Papa Kadam and make him look bad. The day the Maison Mumbai is set to open, she purchases all the supplies in the market so he has to travel to the next village for food to serve his patrons. She complains about the loud Indian music to the mayor (Michel Blanc), but once he samples the Indian food, he is much less inclined to always take her side.

Meanwhile, Hassan is very taken with Marguerite (Charlotte Le Bon), the pretty sous chef at Le Saule Pleureur. She loans him some books on French cuisine. Although they are definitely attracted to each other, their ambitions to succeed as chefs puts a strain on their relationship.

The Hundred Foot Journey is directed by Lasse Hallstrom from the bestselling novel of the same title by Richard C. Morais. As a culinary drama, this is a very appealing movie with its plentiful scenes of food and cooking that stir the senses. Screenplay writer Steven Knight who caught some of the tensions centered around immigrant communities in Dirty Pretty Things lets us ponder the prejudice of some French patriots on Bastille day when they set fire to Maison Mumbai. But instead of running the Indian family out of town in fear, this racist attack animates Madame Mallory to completely change her ways.

There many things we liked about this movie: the magical scene in which Hassan turns an ordinary omelette into something extraordinary because of his culinary genius and love of cooking; the rousing Indian music by A. R. Rahman; the dramatic tension as Madame Mallory awaits the phone call informing her whether her restaurant will get a second Michelin star of excellence; all the scenes showing how the Kadam family works and plays together; and the moment when Papa Kadam realizes that is beloved son Hassan has made a decision that is dear to his heart and would make his mother beam with joy!

The Hundred Foot Journey succeeds as an enchanting movie about family solidarity and the soulful dimensions of cooking. 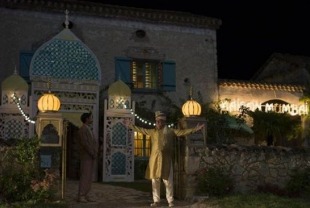 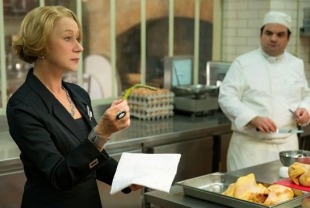 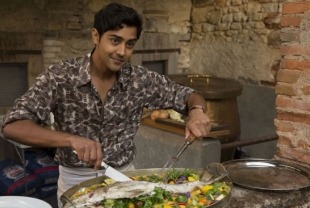 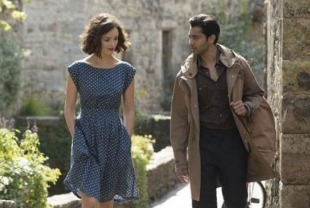