The Trip to Italy

"Travel is an elixir, a talisman, a spell cast by what has long and greatly been, over what briefly and simply is."
— Shirley Hazard

In The Trip (2010) Steve Coogan and Rob Brydon had a jolly time sampling the cuisine around the north of England in return for an article in The Observer. The piece was so popular that the paper now wants them to do another one about the food in Italy.

While Rob is bright-eyed about the offer, Steve worries about "the second album syndrome," where bands shoot their wad on the first and have nothing new or fresh to say on the next one. But after some whining, he agrees and soon they are cruising down the highway in a Mini with stops planned at Pompeii, Rome, and spots along the Amalfi coast.

On this trip, Rob is the one who is filled with energy and ideas. Whereas Coogan's medical drama which is shot in Hollywood has been dropped, Brydon's agent has gotten him an audition for a Michael Mann film. This could be the big break he has been dreaming about for years. To complicate matters even more, Rob has sex with a pretty woman who works on a boat and then feels guilty for having betrayed his wife who is at home with their young child.

Michael Winterbottom knows that we have come to see this film for the guffaws that come from listening to this duo's vocal impersonations of Michael Caine, Marlon Brando, Al Pacino, Roger Moore. They lampoon Christian Bale and Tom Hardy for failing to enunciate clearly in The Dark Knight Rises. They comment on the poets Lord Byron and Percy Bysshe Shelley, who considered Italy their spiritual home. The incredible mix of sights seen from the road adds to the delight of the movie.

By the time Brydon and Coogan reach Capri they are relaxed and more at ease with each other. What could be the reason? It must be the elixir of travel — or the soothing pasta they eat everywhere and the healing balm of so much laughter. 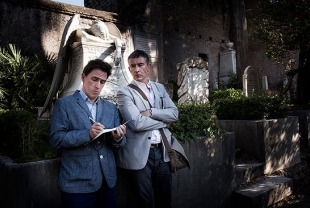 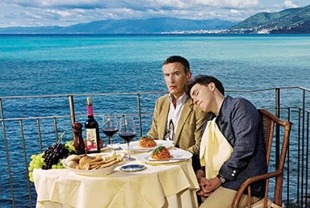