Mountains of the Moon

Directed by Bob Rafelson
An engrossing and robust tale of exploration and adventure.

The quest for the new and the unknown has led explorers to the highest mountains, the deepest oceans, the most impenetrable jungles, the most forbidding deserts, and the far reaches of outer space. Some have been drawn to strange and faraway places by the promise of fame and power. On the other hand, nearly every age has produced restless seekers who have sought less tangible rewards — the thrill of adventure, the knowledge of other cultures, or the desire to quench an insatiable curiosity.

All these impulses are evident in Mountains of the Moon. It is an engaging and robust tale of exploration and adventure directed by Bob Rafelson. Based on the biographical novel Burton and Speke by William Harrison and filmed on location in Africa and England, it recounts two expeditions during the middle of the 19th century to discover the source of the Nile.

Patrick Bergin stars as explorer, scientist, poet, and linguist Richard Burton, a towering individualist with a yen for cross-cultural exploration. He is leading an 1854 expedition in Africa to locate the legendary river's headwaters. Iain Glen is John Speke, a former member of the British army in India who joins the expedition and forges a bond of friendship with Burton. On their second trip, he becomes obsessed with finding the Nile's source to the point of jeopardizing their relationship and ignoring the journey's abundant revelations about Africa and its peoples.

Mountains of the Moon is a winning old-fashioned adventure movie filled with colorful characters, soaring music, perilous events, exotic cultural practices, and breathtaking cinematography. Rafelson does a top-notch job giving this drama both an intimate feel and an epic focus. Fiona Shaw reveals another dimension of Burton through her portrayal of his impetuous, intelligent, and sensual lover. And the final clash between Burton and Speke once they return to England offers insights into the colonial bias of members of the Royal Geographical Society and the competitiveness that can destroy even deeply felt friendships between men. 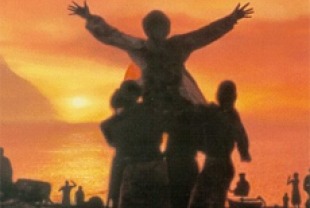