Directed by Mikael Kristersson
An extraordinary film that leaves you with a feeling of deep reverence for the kestrels.

Two kestrels (European falcons) live in a nook near the top of a 13th century church steeple in a Swedish town. From their perch, they overlook a nearby brick rooftop, the graveyard below, the surrounding neighborhood houses, and far off in the distance a field populated, at various times, by cows, sheep, and horses. This is where the kestrels turn into fierce hunters of mice and lizards. These resourceful birds are shown hovering over a prey just before swooping down for their kill.

More food is needed when eggs are laid and six hungry chicks hatch. The birth of these young ones takes place in counterpoint to a funeral in the graveyard. The cycles of life and death are a natural rhythm in this film, as is the changing of the seasons.

It took nature filmmaker Mikael Kristersson two and a half years to make Kestrel's Eye. With no music or narration, we are drawn into the sounds of the birds themselves (cooing, chirping, bleating) and the noisy presence of humans (airplanes, sirens, a cell phone, the church bells, a car horn, the singing of the congregation, the church organ, a youth choir, the pavement slapping feet of joggers, and a passing band in a parade).

The great Jewish spiritual teacher Abraham Joshua Heschel once wrote: "Reverence is a specific attitude toward something that is precious and valuable. . . . It is a salute of the soul, an awareness of value without enjoyment of that value or seeking any personal advantage from it." Kristersson shows great respect for these kestrels, who live in a world of their own. One of the most touching sequences in the documentary shows the maturing of the five kestrel fledglings to a point where they are ready to leave the nest for the first time. This is contrasted with a bridal couple below in the churchyard getting ready to leave their parents and cleave to each other and create their own world. For a brief moment, the two worlds intersect in a mystical and touching way.

At the end of this extraordinary film, we were left with a feeling of deep reverence for the kestrels. And oddly enough, our Maine Coon cat, Clare, seemed to have a similar experience. First attracted by the gentle sounds of these beings, she watched most of the program with rapt attention at a distance of about one foot from the TV screen. 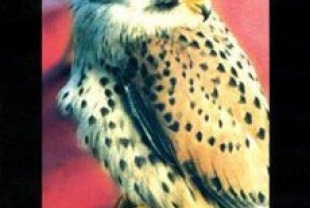