The Disappearance of Eleanor Rigby

Sometimes the bond between a husband and wife is stronger than any of the multitude of tragedies that assault their love. But other intimate relationships can be destroyed in the blink of an eye. Marriages are also burdened by the unconscious longings and the unfinished business of childhood.

Writer and director Ned Benson has fashioned an inventive and soul-stirring portrait of a troubled marriage hobbled by expectations, grief over a devastating tragedy, and a series of other losses which have accumulated over the seven years this couple has been together. Their story is told in three ways. This film, Them, is being released first and presents the events in a traditional chronological unfolding. Releasing in October 2014, Him tells the same story from the man's perspective, and Her gives us the woman's point of view.

Conor Ludlow (James McAvoy) is a thirty-something owner of a small bar and restaurant in Manhattan who is madly in love with Eleanor Rigby (Jessica Chastain), and she seems to reciprocate. In the opening scene he reminds her: "There is only one heart in this body; have mercy on me."

In the next scene we see Eleanor biking to a bridge and looking at the water. We realize that she has lost the will to live. Through the course of the film, we are able to piece together the sources of her despair. She feels her relationship with Conor has changed and she is desperate to find herself again. Both of them share a consuming grief over the death of their baby son a few months earlier, but they are unable and unwilling to talk about it. There is nothing Conor can do or say to stop his wife from leaving him.

After she survives her suicide attempt at the bridge, Eleanor seeks solace in the Connecticut home of her parents. Her father (William Hurt) teaches at NYU, and her mother (Isabelle Huppert) is a former violinist who never really wanted the maternal life. Eleanor's sister (Jess Wexler) and her son try to cheer her up but everyone in the household feels the tension and the confusion of this depressed young woman. She apologizes for dropping into their lives and "sucking all the air out of the room."

Conor tracks his wife down and discovers that she is taking a course in identity theory, a good subject for her given that she admits to not knowing who she really is nor what she wants. Her professor (Viola Davis) takes an interest in her and eventually suggests she finish her anthropology dissertation in Paris.

Meanwhile, Conor sinks into a deeper funk after he is struck by a taxi, finds out he will have to sell his bar, packs up the apartment he shared with Eleanor, and moves in with this father (Ciaran Hinds). He receives moral support from his best friend (Bill Hader) and is seduced by the lonely barmaid (Nina Arianda) who works for him.

At one point, Conor's dad who runs a successful restaurant and is getting more philosophical as he ages, says to him: "It isn't yours to investigate the past . . . you shouldn't be interested in regretting things." Still, Conor wants to know why Eleanor has left him. Her family struggles to find a way to help her. Her father observes, "Tragedy is a foreign country — we don't know how to talk to the natives." Both of them ask whether others see them as different people.

First time writer and director Ned Benson refuses to simplify the complex and paradoxical challenges faced by Conor and Eleanor as they each try to stand up on their own two legs in a world where all the old verities no longer seem relevant. Life and especially the deluge of losses which take a heavy toll on our souls leave us more willing than ever to admit that we don't have answers to the tragedies and setbacks which deck us.

In one of the film's many magical moments, Eleanor's father recounts an incident when she was about two years old and he carried her out into the ocean. After they were hit by a large wave, he came up without her — the worst moment of his life — and then felt her at his feet — the best moment of his life. Life is like that, sorrow and joy bump into each other.

Benson has not only written a substantive screenplay, he has also drawn out nuanced and touching performances from James McAvoy and Jessica Chastain as Conor and Eleanor. They are surrounded by strong and standout performances by all the cast, especially Ciaran Hinds, William Hurt, and Viola Davis. These characters provide the emotional workshop where Conor and Eleanor are able to test their wings as they embark upon the path to new lives. And as they explore the mysteries of love and loss, we find ourselves doing the same.

Special features on the DVD include a Q & A with Jessica Chastain & James McAvoy. 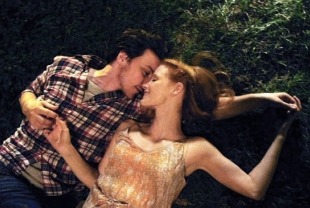 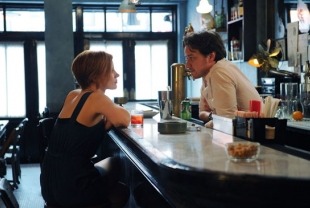 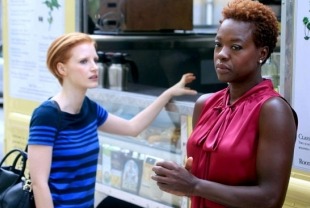