Jimi: All Is by My Side

Directed by John Ridley
A quirky and appealing glimpse into the life and guitar virtuosity of Jimi Hendrix.

This consistently quirky and appealing biopicture of rock guitarist Jimi Hendrix (1942-1970) is written and directed by John Ridley (screenplays for 12 Years A Slave and Three Kings). Instead of covering his entire career, it focuses on one year, 1966-1967, ending with his appearance at the Monterey Pop Festival. During this period, we see a shy, intense, moody, and creative guitarist searching for his place in the crowded and very competitive musical scene of London, England.

"My goal is to be one with the music. I just dedicate my whole life to this art."
— Jimi Hendrix

In May, 1966, Linda Keith (Imogen Poots), the notorious girl friend of Rolling Stones guitarist Keith Richards, is absolutely astounded in the Cheetah Club in New York City when she hears the guitar work of Jimi Hendrix (Andre Benjamin) playing with Curtis Knight and the Squires. She not only senses his immense talent but knows that he is a zealot in his commitment to his art. All he lacks is ambition and the right council to set him on a successful career path. Linda also gets a charge out of introducing Hendrix to drugs.

"The story of life is quicker than the blink of an eye, the story of love is hello, goodbye."
— Jimi Hendrix

After Linda introduces Chas Chandler (Andrew Buckley), a former member of the Animals, to Jimi, he decides to manage him and they head off to London. There Hendrix meets another woman who will play a major role in his early career — Kathy Etchingham (Hayley Atwell). Their connection is totally on the sexual plane and lacks the intimacy that is at the heart of the guitarist's platonic relationship with Linda Keith. Eventually the rock star tires of Kathy and assaults her in a pub. For Hendrix and most of his male peers in the rock scene, "love is hello, goodbye."

"All I'm gonna do is just go on and do what I feel."
— Jimi Hendrix

Jimi Hendrix is a huge fan of Eric Clapton (Danny McColgan) and gets a chance to join a jam session with him and Cream. Clapton is so stunned by this African-American's mastery of the electric guitar that he leaves the stage in order to catch his breath.

"White collar conservative flashin' down the street, pointing that plastic finger at me, they all assume that my kind will drop and die, but I'm gonna wave my freak flag high."
— Jimi Hendrix

In two crucial scenes, we see how Hendrix handles the challenges and complexities of being a black man during the 1960s when racism was dominant in both England and the United States.

In the first scene, Hendrix and Kathy Etchingham are engaging in a sarcastic back-and-forth with hostile police. Hendrix "has a laugh" when officers take issue with his military jacket. When asked if he fought in an actual war, the rock icon smiles and says he's in a "constant, constant struggle" with "the color grey" and "small minds." "You're a disgrace to every man who wore that uniform," says an angered policeman, who forces Hendrix to take off the jacket.

"Music doesn't lie. If there is something to be changed in this world, then it can only happen through music."
— Jimi Hendrix

The second crucial scene takes place in the home of a black power activist and intellectual who grills Hendrix on freedom, racism, politics, and his views on issues of the day. The singer/songwriter holds his own and speaks from his heart. For him, music is the best change agent in the world.

One of the most delightful surprises depicted in the film takes place at the Savoy Theater. Hendrix delights his fans with his rendition of "Sgt. Pepper's Lonely Hearts Club Band." With his musical genius, he lets everyone in the audience know that playing your music or doing covers of the music of others is the highest form of fun and pleasure and the best way of moving around.

"Excuse me while I kiss the sky."
— Jimi Hendrix 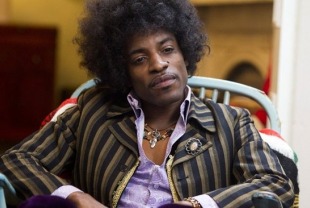 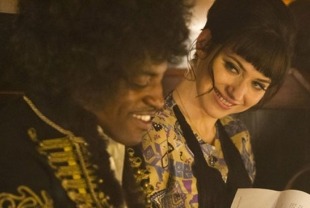 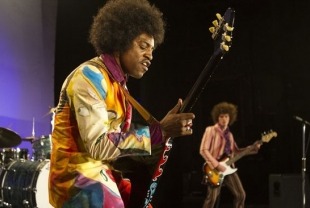 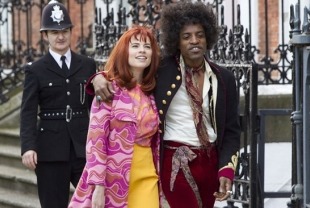