This Is Where I Leave You

Directed by Shawn Levy
A dramedy that provides humor, heartbreak, and vulnerable characters we can empathize with as they live out their messy days.

We remember The Royal Tenenbaums as a family dramedy that took us into fresh and hilarious new territory. This Is Where I Leave You isn't that ambitious but it does manage to introduce us to an entertaining band of dysfunctional relatives who are funny and vulnerable in ways that touch us.

Judd (Jason Bateman) has just found out that his wife (Abigail Spencer) has been having a year-long affair with his boss, the foul-mouthed host (Dax Shepard) of a talk radio show. Then, before he can sort out his feelings beyond anger and disappointment, he is summoned back to the suburban house of his childhood for his father's funeral.

Although he wasn't very close to this man of few words who had an aversion to affectionately touching his children, Judd has always been close to his mother Hillary (Jane Fonda), a celebrity shrink whose large breast enhancements are a source of dismay and embarrassment to him and his two brothers and sister. Equally off-putting is the news that his father's last request was that the family observe the seven-day Jewish ritual of sitting shiva, even though the family has never practiced Judaism. On hand to guide them is the local rabbi (Ben Schwartz), a childhood friend of the boys, for whom they have a nickname they use repeatedly to humiliate him in front of their friends and neighbors.

Judd's sister Wendy (Tina Fey) is his soulmate in the family circle. She is bothered by her workaholic husband who is on business calls all the time. She is still attracted to her first love (Timothy Olyphant), a neighbor who suffered a brain injury when they were in an accident together as teenagers. One of Wendy's two little children is being potty trained and he makes it clear to everyone who sees him carrying around his little toilet that life is indeed a messy affair.

Judd isn't all that close to his two brothers: Paul (Corey Stoll), who runs the family business and has been desperately trying to have a baby with his wife Alice (Kathryn Hahn), and Phillip (Adam Driver), the archetypal family screw-up who is presently involved with Tracy (Connie Britton), a therapist who is older, wealthier, and much wiser than he is.

Shawn Ley directs this dramedy which has been adapted for the screen by Jonathan Tropper from his own novel. Although the movie is too long and some of the comic bits come across as tawdry, This Is Where I Leave You manages to draw out our empathy for these conflicted characters. The performances by the ensemble cast are impressive but Jason Bateman and Tina Fey are especially good in their intimacy as a caring brother and sister. She encourages him to jump-start his future by not being so cautious and taking a leap in the dark. Will a friend from high school (Rose Byrne) who still lives in town provide him with a possible new life? Who knows? Life is complicated and messy. 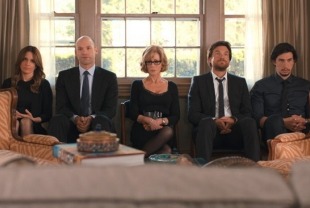 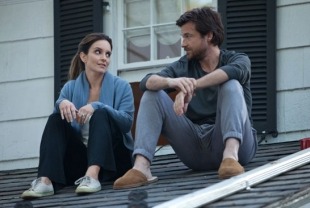