Directed by Yann Demange
A riveting film about a British solder adrift in 1971 Belfast, a dangerous war zone filled with zealous partisans of all types.

The fierce battles between British soldiers, the IRA, and other armed warriors in 1971 turned the streets of Belfast into a dangerous war zone. Gary Hook (Jack O'Connell), a teenage orphan, is a new British army recruit in training. He and his comrades muster all their strength and energy as they undergo the rigors of training. But nothing prepares them for the shock of being immediately sent to the Northern Irish capital on an emergency peacekeeping mission. The Corporal tells them they will only be staying in the city "til one of the Paddies shoots you."

During a messy and very violent encounter with a crowd of rioting Belfast citizens, Hook and his unit must flee. When a fellow soldier is shot in the head, he has no choice but to run for his life. An armed gang of provisional militia chase him through the streets as he dodges bullets and the Molotov cocktails exploding around him.

Luckily, he is taken in by a tough boy (Corey McKinley) from the UDA (Protestant paramilitary). His promise to take Hook back to his platoon is shattered by an accidental bomb explosion. Two Catholics, Eamon (Richard Dormer) and his daughter Brigid (Charlie Murphy), save Hook's life after he's seriously wounded in the explosion. But despite his wound, he must flee again after learning he is the target of two IRA members (David Wilmot and Killian Scott) in a struggle for power within the organization.

'71 marks the debut of Yann Demange as a feature film director. It is a riveting film that vividly conveys the senseless carnage and ruthless hatreds that animate parties on all sides in the Northern Ireland conflict. Sometimes it is hard to keep straight all the military players in the chase but screenplay writer Gregory Burke makes the point that they all are zealous believers in the redemptive power of revenge. It is easy to identify with Jack O'Connell's British soldier as he struggles to survive one adversity after another. 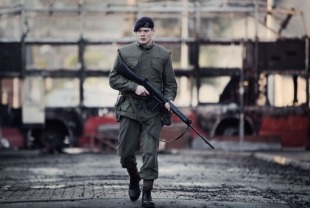 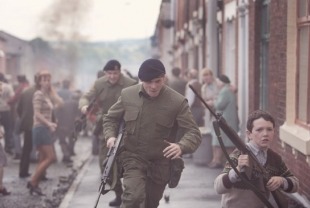 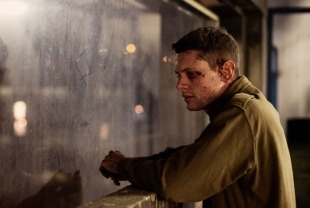 A Prayer for the Dying

The Wind That Shakes the Barley