Directed by Philippe Falardeau
An emotionally warm and immensely appealing story of the immigrant experience of some survivors of the 1980s genocide in Sudan.

An estimated two million people were killed during the civil war in Sudan in the 1980s. Many survivors spent nearly 13 years in refugee camps in Kenya. A humanitarian effort by various church and social service agencies brought 3,600 of these orphans to America. The 2004 documentary Lost Boys of Sudan follows two boys in Houston as they face some of the same struggles and hurdles faced by other immigrants.

The Good Lie is a fictional account of a family of Sudanese refugees who are chosen to emigrate to the United States. In their heads are vivid memories of the deaths of their parents and other relatives in a murderous attack on their village. In their bodies they carry the pain of a 750-mile walk to the Kakuma refugee camp and the memory of those who died along the way of starvation, dehydration, and random attacks by murderous soldiers.

After all they have been through together, brothers Mamere (Arnold Oceng), Jeremiah (Ger Duany), and Paul (Emmanuel Jal) are stunned when their sponsoring agency is unable to find a home for their sister Abital in Kansas City, Missouri, so she is sent to Boston. Carrie Davis (Reese Witherspoon) meets them at the airport and announces that she is in charge of helping them to find work.

Mamere takes two jobs since he wants to become a doctor. But he is still haunted by the death of his older brother Theo who sacrificed himself so his brothers and sister could survive their trek across Africa. Jeremiah is a sincere Christian who loses his job at a grocery store by disobeying the rules and giving thrown away food to a woman in need. And Paul falls under the influence of two co-workers at a factory job who introduce him to drugs.

Philippe Falardeau (Monsieur Lazhar) directs this warm-hearted and immensely appealing drama based on a screenplay by Margaret Nagle. The writer has spiced the story up with various humorous bits on the reactions of these Sudanese men to Carrie's status as an independent woman and their confusion about what to do with telephones, jello molds, and ice rinks. The title of the movie refers to the lies Huck Finn tells in The Adventures of Huckleberry Finn in order to save the life of his friend Jim.

The authentic spirit of the Sudanese people is reflected in the respect they verbalize for people, often disarming them with courtesy and kindness that is not usually a part of American conversation. In Sufism, this would be seen as adab or the art of expressing oneself in beautiful actions. The film ends with a tender and sacrificial act of adab. 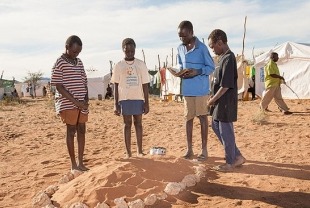 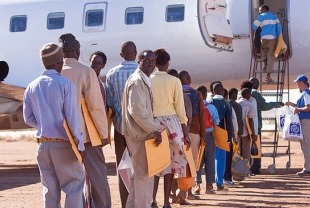 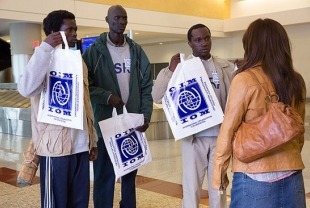 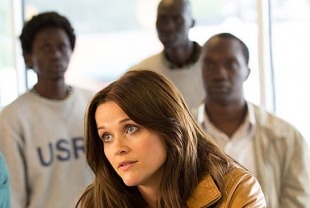