Directed by Paul Thomas Anderson
A jaunty screen adaptation of Thomas Pynchon's comic 2009 novel about the demise of the hippie era of free love and pot-happy endings.

Doc Sportello (Joaquin Phoenix) is a laid-back private investigator living in a bachelor pad in Gordita, a California beach community. Although he is a genuine stoner who has a hard time relating to reputable citizens who work hard and don't play very much, he has an odd relationship with Bigfoot Bjornsen (Josh Brolin), a LAPD detective who takes pleasure in putting down the antics of cannabis smokers. The cop gets a bang out of using the movie phrase, "What's up doc?" whenever he bumps into his buddy. Penny Kimball (Reese Witherspoon) is a straight-arrow deputy D.A but that does not stop Doc from lusting after her.

One day Shasta Fay Hepworth (Katherine Waterston), Doc's sexy ex-girlfriend, shows up asking for help. She has a lover named Mickey (Eric Roberts) and his wife wants to send him to an insane asylum so she can take over his fortune. But before Doc can get his engines revved up for this case, he finds himself accused of murder and soon discovers that both Shasta and Mickey have disappeared. This is the way things go in his life — he lands a new case and then winds up with no money or clues as to what is going on around him. No wonder he takes every chance he can get to chill out.

Following some leads on his case, Doc learns about the Golden Fang, a schooner docked at San Pedro. More information and clues pile up around this mystery — it could be connected to a drug syndicate or a cabal of dentists involved in illegal property developments. The key to finding the answer lies with Dr. Rudy Blatnoyd (Martin Short), a strange deranged man who loves cocaine and fancy suits.

Inherent Vice is the seventh movie directed by Paul Thomas Anderson. He has a loyal legion of fans who immerse themselves in his stories such as The Master. This screen adaptation of Thomas Pychon's celebrated 2009 novel reveals a deep affection for the rafish Los Angeles private eyes who have populated our consciousness over the years — written by Philip Marlowe, Raymond Chandler, Robert Towne, and others. There are also hints of three classic private eye yarns: Roman Polanski's Chinatown, Arthur Penn's Night Moves, and Robert Altman's The Long Goodbye.

Mentioned several times in the story are the Manson murders which knocked the wind out of the hippie movement and signaled the last gasps of the counterculture with its celebrations of drugs and free love. Hedonism is still a ticket out of boredom as Doc learns from the physical presence of Clancy Charlock (Michelle Sinclair) and from his ex-girlfriend who turns him on in a slow scene of kinky sex.

Similar to the lead character in The Big Lebowski, this detective struggles to solve the mysteries which surround him. In his work on the case, he encounters Coy Harlingen (Owen Wilson), a musician friend; his lawyer Sauncho Smilax (Benicio Del Toro); Hope Harlingen (Jena Malone), a drug addict; Riggs Warbling (Andrew Simpson), a spiritual coach; and two nasty FBI Agents, Borderline and Flatweed (Timothy Simons and Sam Jaeger).

The Buddhists emphasize the transitory nature and impermanence of life. The lawyer in the movie, points to the meaning of the term, "inherent vice" with the cogent mantra: "Eggs break, chocolate melts, glass shatters." Nothing lasts forever is Anderson's important message to us. Or as this story puts it:

" 'Suzuki Roshi, I've been listening to your lectures for years,' a student said during the question-and-answer to me following a lecture, 'but I just don't understand. Could you just please put it in a nutshell? Can you reduce Buddhism to one phrase?'

" 'Everything changes,' he said. Then he asked for another question."
from To Shine One Corner of the World by David Chadwick

Special features on the Blu-Ray/DVD include Los Paranoias; Shasta Fay; The Golden Fang; Everything in this Dream. 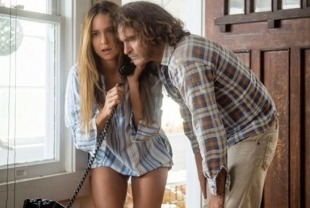 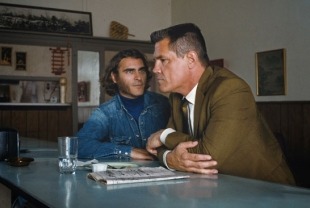 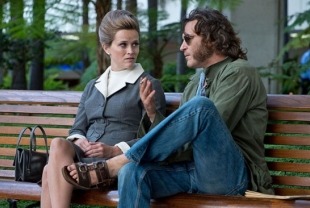