Smell of Camphor, Fragrance of Jasmine

Directed by Bahman Farmanara
A compelling Iranian film about the mini-deaths that can be rehearsals for the great performance at the end of life.

While most people fear death and try to avoid dealing with it or thinking about it, "to the enlightened, the awareness of death gives sweetness to life," the great spiritual writer Anthony de Mello observed. However, achieving this frame of mind can be a long, hard journey. That certainly is the case for Bahman Farmanara, a 55-year-old Iranian filmmaker who has fashioned a compelling drama out of his own encounters with the Grim Reaper.

Banned from making films in Iran for 20 years by the Post-Revolutionary Censor Board, Bahman Farjami, as the director calls himself in the story, decides to do a documentary on burial rituals for Japanese television. For the past five years he has been in a deep depression following the death of his beloved wife. His son tries to cheer him up with the news that he'll soon be a grandfather. His sister chastises her brother for still smoking and eating the wrong foods after two heart attacks.

Farjami is unnerved by an encounter with a woman who just gave birth to a dead baby, by the disappearance of his daughter's husband, and by a trip to the morgue where he learns that a 14-year-old girl has committed suicide. Things get worse when the filmmaker visits his wife's gravesite and discovers that the plot he purchased for himself next to hers has been given to someone else.

All of these experiences are mini-deaths, rehearsals for the great performance at the end of life. Farjami decides that he wants to make all the arrangements for his own funeral. But trying to be in control of the future is a futile effort.

In one of the film's most touching moments, Farjami visits his elderly mother who has Alzheimer's. He laments the injustice of this form of dying before death. Then he briefly rejoices in the smell of the jasmine plants in her home, which brings to mind images of youth, freshness, and energy. This renewing fragrance is contrasted with camphor, an odor associated with death. Pursued relentlessly by the dark cloud of mortality, Farjami ends up briefly being renewed by the sweetness of life in the natural world.

The DVD includes scene selections and the original theatrical trailer. 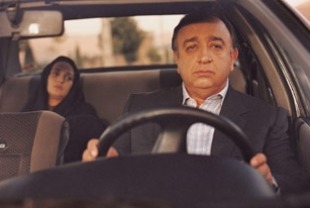